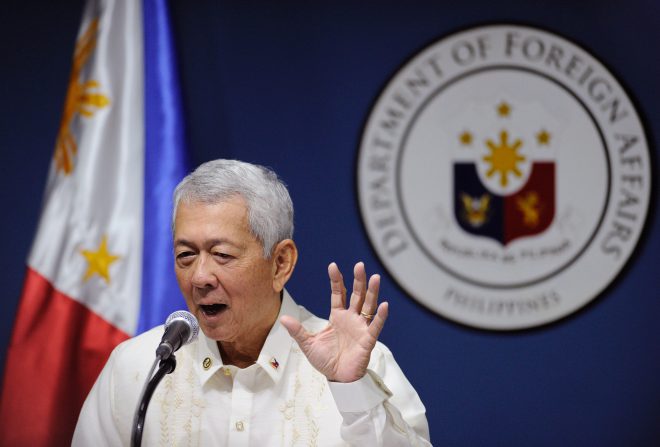 Yasay: 3 or 4 notes verbale sent to China on activities in disputed waters

The Philippines has issued a note verbale to China verifying the reported buildup of weapon systems in the artificial islands in the disputed South China Sea, Malacanang said on Tuesday.

In a statement, Presidential Spokesperson Ernesto Abella said the Philippines will "continue to assert" its sovereignty over the disputed territory in the South China Sea.

"We have issued a note verbale to China regarding the buildup of weapon systems in man-made islands in the South China Sea," he said, stressing, "aggressive and provocative diplomacy will bring us nowhere so we dealt with the issue formally."

In an interview by ANC, Foreign Affairs Secretary Pefecto Yasay Jr. said  three or four notes verbale have been issued by the Philippines to China regarding its activities in the disputed waters, the latest of which was  late last year or early January.

He said the last note verbale was issued when the report came out regarding China's installation of weapon systems and after the government's intelligence confirmed the report.

Liu’s request for an audience with President Rodrigo Duterte “is simply a courtesy call and exchange of pleasantries,” he said.

“ It cannot involve discussions of substantive issues that will undermine the purpose and process of our political consultations."

While the Philippines will continue to assert its sovereignty, Abella also said it will remain consistent with the efforts of Duterte to revitalize longstanding ties with China.

"As always, we shall staunchly support all efforts to maintain peace and stability in the region," he said.

The Hague-based Permanent Court of Arbitration issued a ruling in July last year favoring the Philippine petition invalidating China's nine-dash line, which practically covers claim in the entire South China Sea, including areas within the 200-nautical miles exclusive economic zones of other countries, like the Philippines.

"When you want to renew ties with another country, it does not mean that you're compromising or eroding our rights on certain matters in this particular matter our sovereignty rights over the exclusive economic zone that under UNCLOS is ours," Yasay said. Celerina Monte/DMS