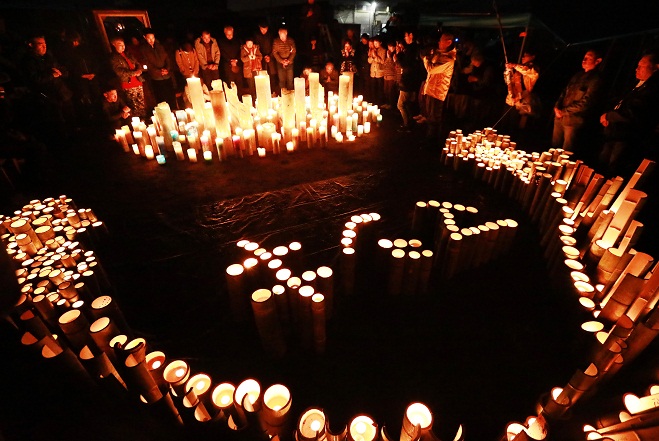 Kumamoto--A ceremony was held in the city of Kumamoto, southwestern Japan, on Sunday to remember people who died in a series of powerful earthquakes three years ago.

A total of 345 people, including 75 bereaved family members, participated in the memorial ceremony at the Kumamoto prefectural office.

After participants observed a minute of silence, Kumamoto Governor Ikuo Kabashima, while expressing his sorrow over the deaths, pledged greater efforts for reconstruction.

"At a time when a new era is about to begin, people across the prefecture will join forces to build a new Kumamoto," Kabashima said in a speech, referring to Japan's next era, Reiwa, which is scheduled to begin on May 1, when Crown Prince Naruhito accedes to the Imperial throne.

In another speech, Keisuke Masuda, an 81-year-old resident of the village of Minamiaso whose wife, Fumiyo, died in the quakes at the age of 79, expressed hopes for reconstruction.

"I want to play a role in reconstruction efforts for the sake of my wife," Masuda said. After the speeches, participants offered flowers at an altar and mourned the victims.

In a separate ceremony held at a Tokai University campus in Minamiaso, about 70 university officials gathered to pray for three students killed in the quakes.

In the town of Mashiki where 45 people died in the quakes, about 500 lanterns were placed at a makeshift housing complex in the night to mourn the victims. Residents and volunteers offered a moment of silence in a memorial ceremony.

Similar memorial ceremonies are scheduled to take place across the prefecture through Tuesday.

On April 14, 2016, a 6.5-magnitude foreshock struck, followed by a 7.3-magnitude main shock two days later. Both measured the highest reading of 7 on the Japanese seismic intensity scale in some locations.

The total death toll has reached 273, including 50 people who were directly killed by the quakes.

As of the end of last March, 16,519 people still lived in temporary housing following the quakes. Jiji Press