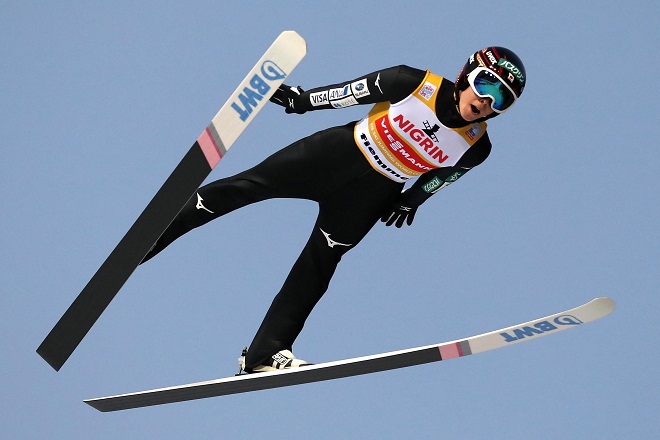 Val di Fiemme--Japanese ski jumping sensation Ryoyu Kobayashi, who became the third person ever to win an overall victory with a "grand slam" in the prestigious Four Hills Tournament, has expressed joy over the feat, in an exclusive interview with Jiji Press.

"People talk to me wherever I go, and this makes me realize (that I've won the tournament)," said the 22-year-old, who belongs to the skiing club of Tsuchiya Home, based in Sapporo, the capital of the northernmost Japan prefecture of Hokkaido.

"I enjoyed (the tournament) because I could make a big jump on every hill," he said. The interview took place in Val di Fiemme, Italy, on Jan. 10.

The rising ski jumping star clinched an overall title in the Four Hills Tournament in the 2018-2019 season, winning all of the four jumping events held around the turn of the year. The first two events took place in Germany and the latter two in Austria.

Kobayashi became the second Japanese ski jumper to win an overall Four Hills Tournament title since Kazuyoshi Funaki achieved this in the 1997-1998 season. The famous competition has a long history, dating back to the early 1950s.

Kobayashi has been showing spectacular performances this season, scoring his first World Cup victory, in an event held in Ruka, Finland, in November. So far in the season, he has taken nine of 13 World Cup events, including the grand slam wins in the Four Hills Tournament, also known as the German-Austrian ski jumping week, as of Sunday.

In the third event of the Four Hills Tournament, in Innsbruck, Austria, he had a big jump, but at the same time suffered pain in his neck. Still, Kobayashi won the fourth and final event, in Bischofshofen, also in Austria, partly thanks to the fact that its preliminary round was postponed due to heavy snow. "I was lucky," he said.

Hopes are growing for Kobayashi to win the Nordic World Ski Championships, scheduled for February-March in Austria, and to become the first Japanese to attain an overall World Cup victory.

"I think I have chances, but I plan to compete without thinking too much," Kobayashi said. "It's all right if I can continue making big jumps without getting injuries." Jiji Press