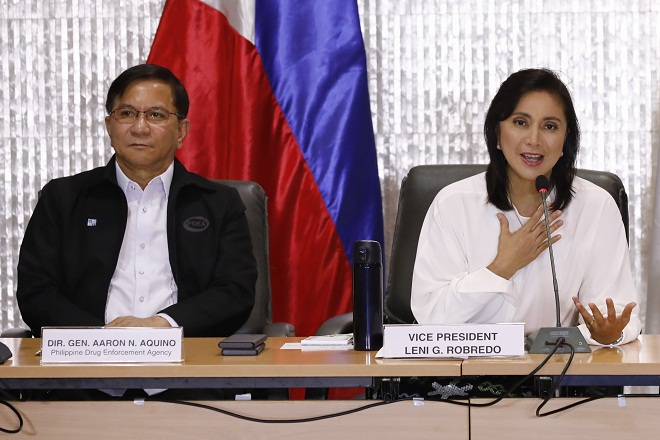 Robredo says problem on drugs, number of users should be solved ”internally”

Now that Vice President Leni Robredo is the co-chairperson on the government's campaign on illegal drugs, she said on Friday the problem should be first solved "internally".

In a press briefing after her first meeting as a co-Chair of Interagency Council on Anti-Illegal Drugs (ICAD), Robredo clarified her stand on allowing the United Nations to go to the country to investigate killings on the government's campaign against illegal drugs.

"I have said this time and again that I feel our problem should first be solve internally," she said.

"Moving forward, it's hard to say for now (allowing UN investigation) because we still don't have the complete data on how we are responding to all the cases that either already filed or not filed yet," Robredo said.

Robredo said she is now coordinating with the UN-Office on Drugs and Crime in the Philippines.

"For them to brief us because they have a lot of researches and papers on anti-illegal drug campaigns... the successes and the failures. That is what I mentioned after I'm designated," she said.

Robredo is also planning to meet other clusters of ICAD to clearly explain to her their job.

One of the clusters she will first meet is the law enforcement cluster. This is composed of the Department of Interior and Local Governent as well as the Philippine National Police.

Robredo disclosed that during the meeting, they were able to find out that the numbers agencies have are not clear.

"This is one of the things I'll discuss with the law enforcement cluster," she said.

"The 1.8 million (drug users), ICAD members think, the integrity of numbers is not credible... the four million on 2016 used a different process to come up with the estimate... the seven to eight million has no explanation where it came from so for me, you cannot trust the numbers," she said.

The 1.8 million estimated drug users came from a survey  by the Dangerous Drugs Board in 2015 while four million came from the Philippine Drug Enforcement Agency.

The seven to eight million drug users came from President Rodrigo Duterte during one of his speeches.

The DDB told Robredo they will conduct a new survey for the numbers of drug users in the country by next year.

Robredo said numbers when it comes to the deaths on drug war and other statistics was not discussed yet.

But Robredo said, she will decide whether there is a need for a UN investigation or not after discussing with all the clusters involved in the war on drugs.

"I would rather that you take care of whatever we have to take care of. There are lot of things that have happened that should have not happened. I want to be informed on how they responded to all these things," she added.

Robredo earlier said she wants to end "senseless killings" on the campaign on illegal drugs by having a new approach.

Robredo said she will also talk to people working on the ground.

"Because I think I can know better the issues on the ground if I personally talk to them," the vice president said.  Ella Dionisio/DMS