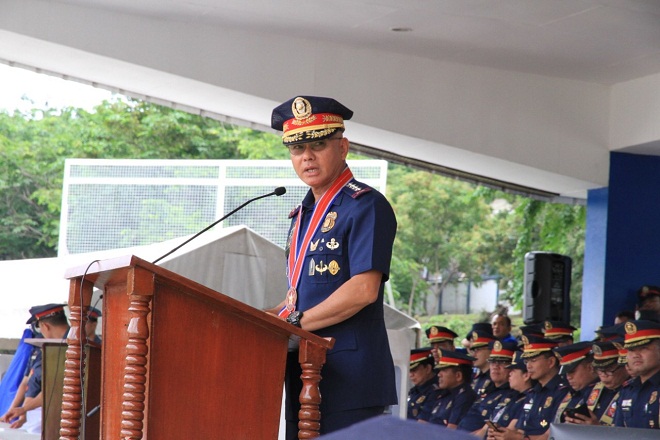 A proposal to restore Republic Act 1700 or the Anti-Subversion Act needs to be studied, according to Philippine National Police chief, Police General Oscar Albayalde.

In an interview with reporters, Albayalde said he support the proposal of Interior Secretary Eduardo Ano on reviving the law.

“We support the move of the good secretary if that will push through but then again, it needs several studies… if it will be more productive or become harmful,” he said.

Ano made the suggestion after receiving reports there are 500 to 1000 youths being indoctrinated by the CPP-NPA every year who become a member of the NPA or return to their schools as militant student leaders.

“They are using their alleged nationalism to teach children to kill and take up arms against the government,” he said.

For the PNP chief, these incidents are just few and these actions of the leftist groups are their way of showing they exist.

“They are struggling desperately to show their existence and significance in our community,” he said.

Albayalde said the struggle of the rebel groups was due to their paradigm shift.

“Before the Armed Forces of the Philippines and PNP are on a passive move. We were always defensive but now we are on offensive mode...legally, militarily and whole nation approach. They felt that, that’s why they are struggling to be seen by the public,” he said.

Albayalde urged the public to help the PNP counter the acts of communists.

“This what slows down the country’s growth…  they burn heavy equipment used for 'farm to market' roads… they deprive people from growing,” said Albayalde.

“Let’s be awake… who is really slowing down our growth? And they always say- yes, activism is not a problem. It’s a part of a democratic exercise in our country but when you espouse sedition or encourage sedition or rebellion then that’s a different thing,” he added.

Albayalde said children who join these groups should be the country’s future. He said there are other ways to express their concern to the government.

He added these kids should be staying at home under their parents and not with anybody else.

“Once they were radicalized, later on they will be in the mountains and (be) armed,” said Albayalde. Ella Dionisio/DMS