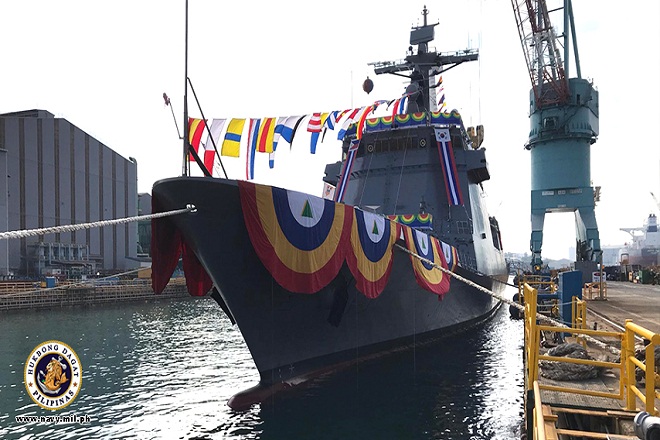 The second missile-firing frigate of the Philippine Navy was launched for the first time in a ceremony in South Korea on Friday.


The first ship, (BRP) Jose Rizal, was launched last May and currently undergoing harbor trials and could be completed by the first quarter of 2020, added Roxas.


Roxas said BRP Jose Rizal will be delivered by April or May 2020 while BRP Antonio Luna on September or October 2020.


Both ships are capable of engaging in the four dimensions of modern warfare. These are Anti-Air Warfare (AAW), Anti-Surface Warfare (ASUW), Anti-Submarine Warfare (ASW) and Electronic Warfare (EW), and are fully equipped with Surface to Surface Missiles (SSM), Surface to Air Missile (SAM), and Torpedoes," said Roxas.


The primary gun is 76mm Super Rapid Gun while the secondary gun is a 30mm gun. It also has chaffs and decoys as defense against incoming missile, she added.


Roxas stressed the importance of getting the two frigates.


"The acquisition of these missile frigates will strengthen the Navy’s capability to safeguard our maritime nation and territorial limits," she said. Robina Asido/DMS