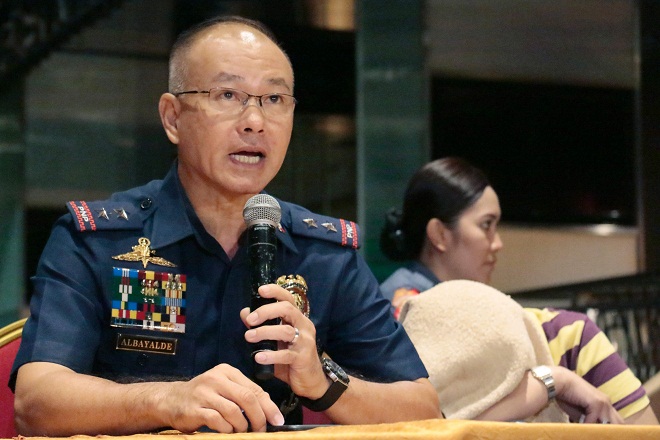 Philippine National Police (PNP)  Director General Oscar Albayalde on Thursday said President Rodrigo Duterte did not say he will violate the law when he announced harsh and widespread violence in his campaign against illegal drugs. "Well the President has...repeatedly said (this) but we do perform our duties in accordance with the law, Albayalde said in a TV interview. "He did not say anything about going above the law," he added. Albayalde said there was no widespread violence even during the start of Duterte administration as they perform their duties within the limits of the law. "When you talk to the President, he will always give his directive that you do your job or perform your duties within the ambit of the law," he said. Albayalde assured the public policemen who violate human rights did not go "scot-free". "Nobody is above the law here, even our police," he said. The PNP chief said they charged about 674 personnel for violating human rights. But for human rights activists, harshness in addressing the issue will not help. "We have been telling the President, evidence-based, human rights and public health center approach works but he did not listen to us," iDEFEND spokesperson Ellecer Carlos said. Carlos said Duterte has "no intention" in resolving the illegal drug problem in the Philippines and only using it to advance towards dictatorship. Last Wednesday, Duterte in his speech warned of widespread violence as he will be harsh in ending the illegal drugs problem. "We will try to finish this.. and I will be harsh. And there might be really widespread violence but I am prepared for that," he said.  Ella Dionisio/DMS