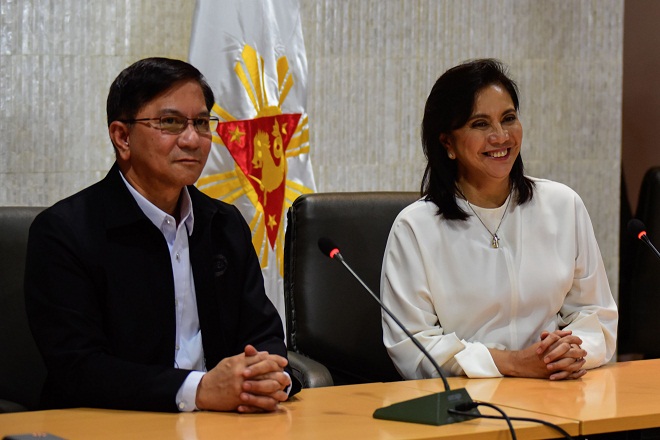 The head of the Philippine Drug Enforcement Agency (PDEA) on Friday said there is no need to scrap the administration's "Oplan Tokhang".

In a press briefing, PDEA Director General Aaron Aquino said the program is a good plan but its meaning is ''being twisted''.

"I think there is no need to remove the Oplan Tokhang. In fact when you define Tokhang it is just asking drug personalities to surrender," Aquino said.

"The meaning of PNP's Tokhang is just being twisted. In fact, it's a good plan," he added.

Aquino suggested to the Philippine National Police ( PNP) to reassess the program.

"They need to reassess it to find out how to fix or make it better," he said.

Earlier, Vice President Leni Robredo said by being Aquino's co-chairperson in the government's campaign against illegal drugs, she wants the "senseless killings" to stop.

Aquino for his part said illegal drug operations should be "transparent".

"There is a rule of law to follow," he said.

Robredo in the same briefing said the PNP assured her that they will follow the rule of law.

"And I think that's enough assurance that killings will not be continuous," she said.

Asked about his previous statements against the vice president, Aquino said they are now ok but he still hopes  Robredo will learn more about law enforcement.

"Because as I said, (she) is bound for failure because in terms of law enforcement. She has no knowledge (about it)," he said.

The PDEA chief then asked her to join them on one of their operation.

"I will also be there and brief you so that from the planning stage until such time during the conduct of operation and after, you will feel what the law enforcers do," he said.

"I think I can challenge you that... so if you are there on the ground you will see for yourself and hopefully you can see if there are lapses being committed by the operatives," Aquino added.

Robredo thanked the PDEA chief for his offer but did not directly say if she wants to be present during operations or not. Ella Dionisio/DMS