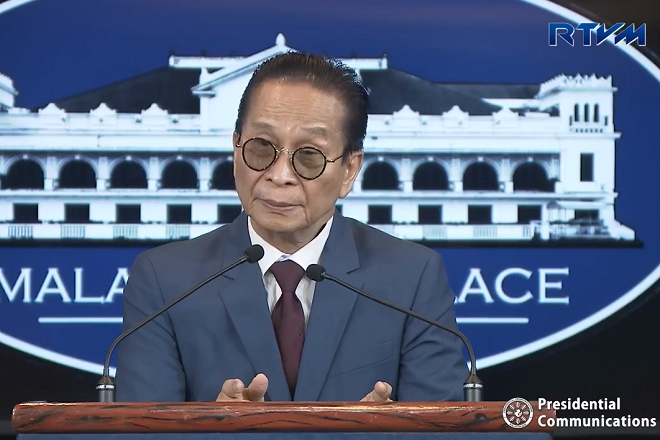 Malacanang said on Friday that it was not surprised by the result of a recent survey, showing that many Filipinos were worried about the rising number of Chinese nationals working in the country.

In a statement, Presidential Spokesperson Salvador Panelo noted that the survey question by the Social Weather Stations was "slantly phrased."

"The Palace is not surprised by the survey result showing that 70 percent of adult Filipinos expressed worry about the increasing number of foreign Chinese working in the Philippines," he said.

"It is a matter of research methodology. We note that the survey question has been slantly phrased," Panelo, who is also the chief presidential legal counsel, said.

"Necessarily, the response is logical and expected because the question already assumes that there exists a cause of worry," he said.

He also accused those who were not supportive of Duterte's "pivot to China" would put political color in the survey.

"In the same logic, those who are opposed to the President's pivot to China by reason of his independent foreign policy, would put political color and tweak and highlight the result of this survey question for political propaganda purposes," Panelo said.

The Third Quarter 2019 SWS survey was conducted on September 27-30 among 1,800 Filipino adults in the country, with sampling error margins of ±2.3 percent.

Prior to the question of how worried the respondents were about the increasing number of foreign Chinese working in the Philippines, they were first asked of the number of Chinese nationals working in their locality.

Panelo assured that the Duterte administration is strictly enforcing the law, especially those pertaining to the immigration and labor policies.

"The President, as always, will prioritize the interests of the Filipino people and our local labor force," he said. Celerina Monte/DMS