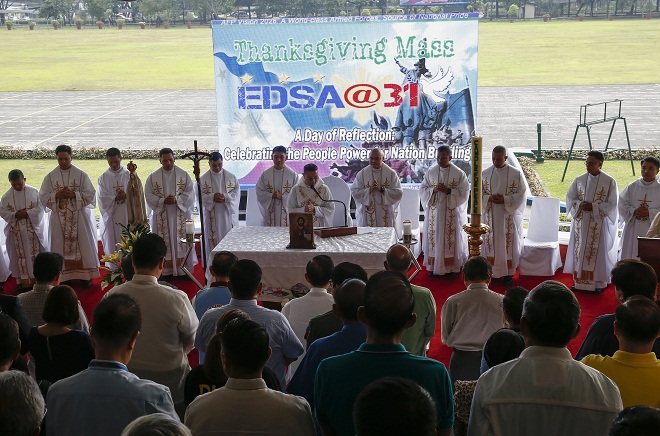 President Rodrigo Duterte said on Friday that Edsa People Power Revolution 31 years ago does not belong to a particular group of people.

Duterte was absent during the "simple" commemoration of the historic event held at the Armed Forces of the Philippines' grandstand in Camp Aguinaldo in Quezon City.

The People Power uprising ousted the late strongman Ferdinand Marcos from 21 years in power and catapulted Corazon Aquino to power in 1986.

"Indeed the spirit of Edsa does not belong to one sector or one group of people, but to all Filipinos who believe in freedom and a democratic way of life," said Executive Secretary Salvador Medialdea, who read Duterte's speech.

"Edsa was not just a cry against years of abuse and corruption of governmental power. More importantly, it was a demonstration of the power that a united citizenry could muster," he added.

He said the Edsa People Power uprising was a movement of, by and for the Filipino people brought about by their profound love of country.

Catholic Bishops Conference of the Philippines President Archbishop Socrates Villegas,  has criticized Duterte for the alleged "rape" of Edsa and how history books are rewritten.

Villegas was under the late Cardinal Jaime Sin, who exhorted over radio thousands of Filipinos to go to Camp Aguinaldo, filling up Edsa as then Defense Secretary Juan Ponce Enrile and Vice Chief of Staff  Lt. General Fidel Ramos were holed up there.

Duterte had allowed the burial of late President Ferdinand Marcos at the Libingan ng mga Bayani despite the opposition of some groups, particularly those who were victims of Martial Law under Marcos regime.

Davao City Mayor Sara Duterte-Carpio hit back at Villegas, saying, "How dare you say that my father has single-handedly defaced the memory of the Edsa revolution!."

Since 1986 and until seven months ago prior to Duterte's assumption to office, she said the country has been hounded by corruption, crime, territorial war of gangs and drug lords, extrajudicial killings, narco-politics, terrorism, protracted rebellion, abuse of power in government, political bickering and the entry of foreign mafias.

"It surely did not start when President Duterte took office," the Davao mayor said, noting that Duterte won the presidency because Villegas and his allies "ignored what was wrong with this world."

"All you desired was to put into power a leader who walks and talks like you - someone who is definitely not Rodrigo Duterte. When your friend failed as a president, I cannot remember you calling it the rape of Edsa. You just swept it under your glitzy rugs and you moved on, back to business - back to acting as if you can save us all from hell," she said.

She even called Villegas and his colleagues as "bunch of delusional hypocrites."

"While all of you were up there riding high on your horses, you failed to notice that many of us down here emphatize with what Rodrigo Duterte is saying because it is the hard truth. It is truly without the air of hypocrisy that we smell from your kind," she said.

"How dare you call us pimps of the Edsa spirit and yet it is you who cannot accept what has happened to our country since 1986. How dare you say that we are trying to prostitute the meaning of Edsa."

Sara said his father understood what the spirit of Edsa is as she recalled how Duterte woke her up that night 31 years ago to watch cheering and partying adults on the streets.

"You preach about freedom as if you invented it, as if it is your gift to us," she said, lecturing Villegas freedom is "to live a life that is free from your selective moral standard. This is what the meaning of Edsa is."

"Unfortunately for you Archbishop Villegas, this is not a biased commentary on your letter to the dead because I am not a fan of President Duterte. But you are truly, madly, deeply worse than a hundred President Dutertes."

During the event in Camp Aguinaldo, also present were Ramos, Enrile, former President Jejomar Binay, and other members of the Cabinet. Celerina Monte/DMS