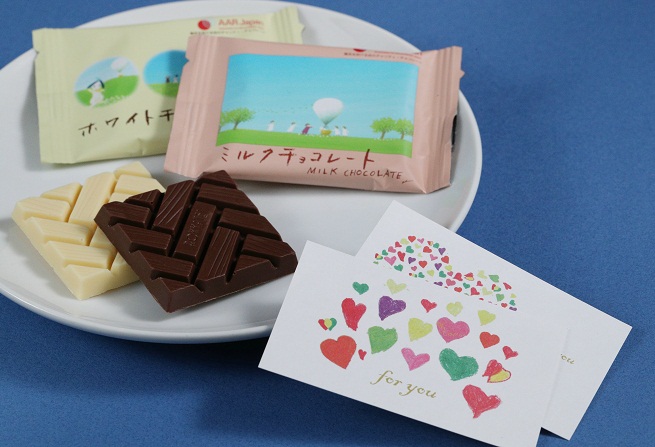 In cooperation with a long-established confectionery maker, the NGOs are calling for assistance to refugees, saying that buying chocolate helps save people.

Founded in 1979, the Association for Aid and Relief, Japan, started selling such chocolate products in 2011.

It sells a box of chocolate for 550 yen, of which around 200 yen will be spent on assistance to Syrian and South Sudanese refugee.

If five boxes are sold, two weeks' worth of food will be provided to a Syrian refugee, according to AAR Japan. The products are available at the association's office and website.

Another such NGO, Japan Iraq Medical Network, or Jim-Net, supports children with cancer in Iraq. It started in 2006 a winter-only charity campaign that gives chocolate to donors.

In return for a donation of 2,200 yen, the group sends the donor four cans each containing 10 pieces of heart-shaped chocolate.

This winter, pictures of dandelions drawn by Syrian and Iraqi children with cancer are painted on the lids of the cans.

To support these projects, Rokkatei Confectionery Co., based in Obihiro, Hokkaido, supplies chocolate to both NGOs at original costs.

"We hope the products will help save people in distress," said a Rokkatei official. Jiji Press