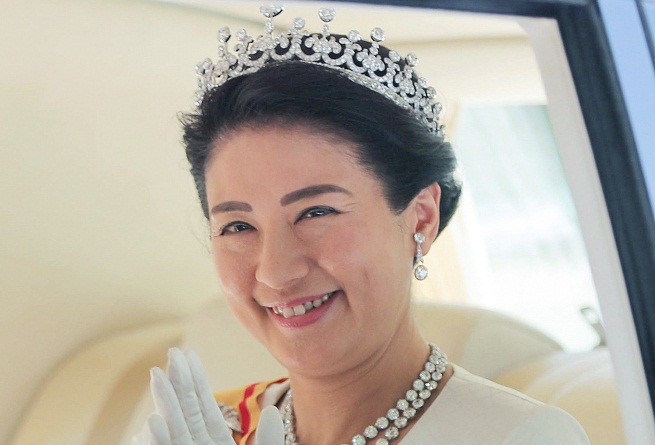 In particular, the Empress, a former diplomat at the Japanese Foreign Ministry, has continued to hold strong feelings about overseas visits.

After gaining confidence on a visit to the Netherlands in 2013 as Crown Princess, she has been gradually spreading her wings in her duties.

Some experts have voiced expectations that the Imperial couple will take on different activities from those of the Emperor's parents, Emperor Emeritus Akihito and Empress Emerita Michiko, with a global perspective.

After marrying in June 1993, the then Crown Prince and Crown Princess visited the Middle East in 1994 and in 1995.

With the Imperial Household Agency prioritizing the birth of an heir to the throne, however, overseas trips by Crown Princess Masako became rare.

The Crown Princess was treated for shingles in December 2003.

In July 2004, it was announced that she was suffering from adjustment disorder. She entered a long period of treatment.

In a press conference in May 2004, just before his departure for a visit to Europe, the Crown Prince revealed that his wife, who had given up her job as a diplomat in order to join the Imperial Family, was distressed that she was not able to go on visits abroad, even though she viewed international goodwill as an important task for a member of the Imperial Family.

The Crown Prince said that it was true that there were moves that denied the Crown Princess' work as a diplomat and her personality.

His statement shocked the public.

Her situation improved thanks in part to the Imperial Family's deep ties with the Dutch Royal Family.

In August 2006, the Crown Prince and Crown Princess, together with their only child, Princess Aiko, stayed in the Netherlands at the invitation of then Queen Beatrix.

Crown Princess Masako made a last-minute decision to attend with her husband the coronation of King Willem-Alexander, who succeeded his mother, Queen Beatrix, after she stepped down, in 2013.

The Crown Princess left Japan on her first official overseas trip in 10 years and four months in April 2013.

At an airport in the Netherlands, the Crown Princess, who had noticed reporters, was seen stopping her husband to wave.

Her doctors said that the visit offered a big opportunity to boost her confidence.

After her trip to the Netherlands, the Crown Princess started to join more official duties, such as visits to the northeastern Japan areas devastated by the March 2011 earthquake and tsunami.

When Dutch King Willem-Alexander and his wife, Queen Maxima, visited Japan in October 2014, the Crown Princess attended her first state banquet at the Imperial Palace in Tokyo in 11 years. Need to Cooperate with Other Royals

Naotaka Kimizuka, a professor at Kanto Gakuin University and an expert on royal families around the world, pointed out that the Dutch king has been working on water issues with Emperor Naruhito.

Kimizuka also hinted that the queen, who became the first female spouse of the Dutch Royal Family in 130 years, may have sympathy for Empress Masako.

"Female royals around the world are involved in issues such as women's empowerment and child abuse," he said.

He suggested that the Empress should work together with other women in royal families around her own age on such problems.

Meanwhile, Kimizuka noted that the Emperor is fluent in English and has many acquaintances around the world.

"I hope that (the Emperor) focuses on global issues, such as those on the global environment, and seeks to build friendships with the new generation," he said, voicing hopes for the Emperor's future activities. Jiji Press