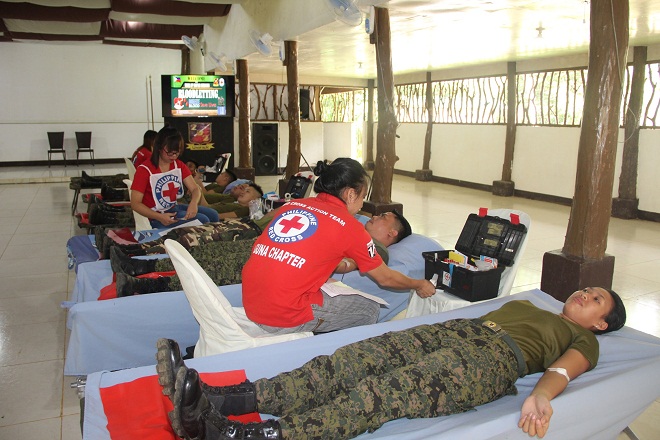 More than 100 soldiers joined a blood donation campaign following the declaration of a national dengue epidemic in the country early this month.

Ternio said the campaign will beef up blood reserves for dengue victims across the country.

“A total of 74,700 cubic centimeters of blood were collected from soldiers assigned in Southern Tagalog who responded to the call of the Commanding General of the Philippine Army’s call for “volunteerism to help victims of dengue,” he said.

Ternio said the bloodletting activity was “conducted simultaneously by different 2nd ID units with the Philippine Blood Bank, Red Cross, Rural Health Units, Department of Health and other partner-agencies sharing the same advocacy of ending the dengue epidemic the country is now facing.”

Brigadier General Arnulfo Marcelo Burgos Jr, commander of the 2nd ID, said  the “noble undertaking is a testament of the soldier’s heroism and commitment to serve the people and save lives, be it in the battlefield or in the field of public health.”

“Your soldiers are one with the DOH in their anti-dengue campaign. We are encouraging our soldiers to adopt the 4 o'clock habit that is to go out, search and destroy mosquito breeding sites,” he added.

Ternio said the “campaign in all 2ID units will continue in order to increase the country’s blood reserve not only to support the requirements of dengue victims but also those of other medical cases.” Robina Asido/DMS