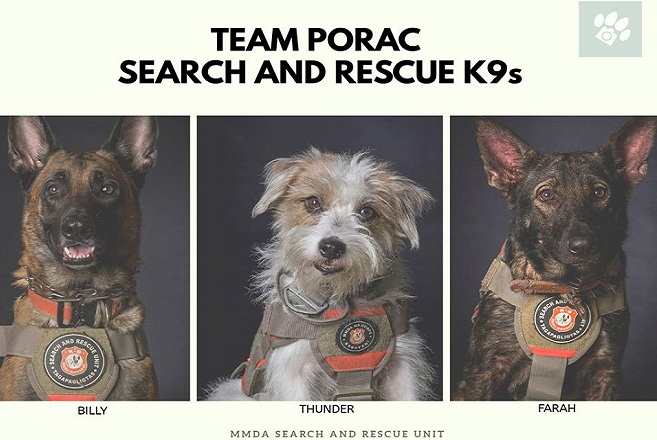 Not all superheroes wear capes.

Nine dogs were being praised by netizens after they helped in the rescue operation on the collapsed Chuzon Supermarket in Porac, Pampanga which resulted in the death of five people.

The K9 unit of the Metro Manila Development Authority ( MMDA) were sent to Porac, Pampanga last April 23. They are back in Manila after they helped locate one of the supermarket’s employee and retrieved the body of a victim.

A photo posted by “Paws and Click” featuring three senior K9 dogs of the MMDA garnered almost 33,000 reactions and 21,000 shares.

“Salute to these fine senior K9s of the MMDA K9 Unit for their search and rescue efforts in a 4-storey supermarket building in Porac, Pampanga,” the caption stated.

In a message to The Daily Manila Shimbun through their Instagram account, MMDA K9 Corps said they are grateful for the support the dogs received.

The unit said they saw these responses but was surprised with the number of engagements a single post received.

“We know how the public supports the team every time we are deployed to disaster stricken areas. We’ve already seen it after the Naga, Cebu landslide when we went there to help in rescue operations,” it said.

“But for a single post about our K9s to go viral is really unexpected and overwhelming,” it added.

MMDA K9 Corps said even Paws and Click were surprised on the fast response of the people.

“We are so overwhelmed how they show their gratitude and love to our dogs,” they said.

Pampanga is one of the hardest hit provinces after a 6.1 magnitude earthquake struck some parts of Luzon last April 22. Ella Dionisio/DMS