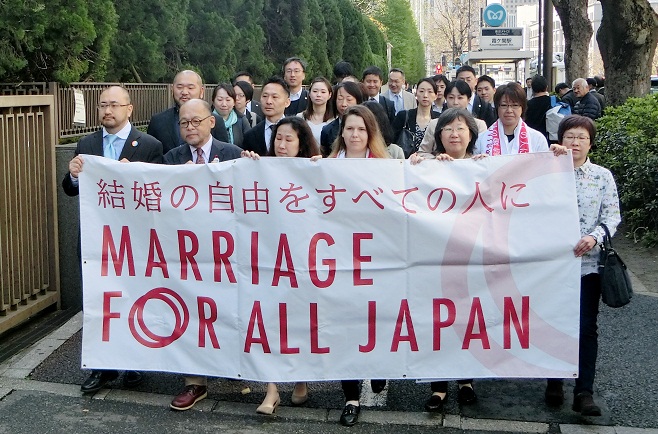 Sapporo--Ayako Fuchigami, a recently elected local assembly member who has come out as a transgender person, aims to pursue a society where everyone can feel comfortable.

Fuchigami, 44, was elected a member of the Hokkaido prefectural assembly in northern Japan in an election on April 7, after calling for the promotion of policies for LGBT, or lesbian, gay, bisexual and transgender, people.

"A society in which LGBT people feel comfortable is also comfortable for everyone," Fuchigami, who has transitioned from male to female, said in an interview in Sapporo, the capital of Hokkaido. "I want to make the wind of diversity blow in the assembly and spread that across the country."

She is the first member of any prefectural or metropolitan assembly in Japan who has announced about being a transgender person, according to a group of LGBT members of assemblies for smaller local governments. Fuchigami worked as a nightclub dancer before the election.

She decided to aim for a seat in the assembly after learning how her senior colleagues at the nightclub had difficult lives after retiring as dancers.

"It's too awful," Fuchigami said. "They're isolated, not accepted by society."

She said her former colleagues should be able to utilize their skills in serving customers more broadly in society, not only in the bar and restaurant sector or in show business.

To realize a society where LGBT people can be accepted, Fuchigami suggests the introduction of policies that recognize the presence of such people.

The city of Sapporo has introduced a partnership program that recognizes same-sex couples. Fuchigami aims to expand the program to the whole of Hokkaido, believing that it can help enhance the awareness of residents and companies in the prefecture about LGBT people.

During her election campaign, Fuchigami was often teased for being a candidate fielded as a crowd puller. She was sometimes told by voters that the LGBT issue had nothing to do with them and that it should be discussed only by such people.

Still, Fuchigami insists that promoting LGBT-related policies will help create a society that welcomes a wider range of people.

Population will grow if LGBT people move in and the local economy would be revitalized if LGBT people from around the world make visits as tourists, she said.

Fuchigami also hopes to work on enacting an ordinance to ban discrimination against LGBT people.

She plans to give careful consideration to the naming and other aspects of the envisaged ordinance so as to avoid it being criticized for reverse discrimination.

"We don't want to be treated with excessive care," Fuchigami said.

"Although I don't think I would be able to do everything I want to do in a single term of four years, nothing will start if I do nothing."

Some public junior high schools in Japan, including those in Tokyo's Setagaya Ward and Nakano Ward, have started offering female students an option to wear pants instead of skirts as school uniforms.

Fuchigami wants to expand such initiatives, by allowing male students to wear skirts as school uniforms, for example.

"No prefecture has approved such freedom in school uniforms," she said. "I hope Hokkaido will be the first to do so." Jiji Press