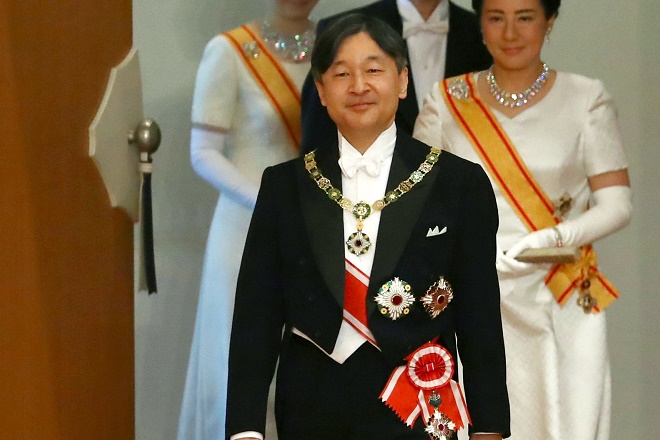 Oxford, Britain--Looking back on his memories with Japanese Emperor Naruhito, Arthur Stockwin, emeritus fellow at the University of Oxford, has hinted that the new Emperor may aim for an open Imperial Family.

The Emperor "may well try to open up the Imperial Household and reduce the bureaucracy that surrounds it (the Imperial Family)," Stockwin, Japanese politics specialist at the university's Nissan Institute of Japanese Studies, said in a recent interview.

Stockwin, 83, knows the 59-year-old Emperor from the days when he studied in Britain, at the university's Merton College for around two years from 1983.

Calling the Imperial Household Agency a "stuffy institution" that "overprotects" members of the Imperial Family, Stockwin warned, "A modern monarchy that fails to interact with the population on a level of reasonable familiarity is likely to become irrelevant to people's daily concerns."

The Emperor, who studied the history of water transportation on the River Thames at Oxford, became the first Japanese monarch to have studied abroad.

While Stockwin was not a tutor of the Emperor, who was in his 20s at the time, he said he got to know the Emperor when he would attend some of his seminars with his bodyguard.

Stockwin even had the Emperor over to his house for dinner once.

At the event, he recalled asking the Emperor what he particularly liked about his life in Oxford.

He said the Emperor replied "freedom" without hesitation

"It was plain from talking with him (the Emperor) that he felt a lot freer when he was in Oxford than he did in Tokyo," Stockwin added.

Describing the Emperor as "a modest person," Stockwin also suggested that the Emperor "is probably a modernizer," who will not be bound to traditions and his position.

On the impact the experience of studying at the university had on the Emperor himself, Stockwin said, "I can't say for certain, but I think probably that he (the Emperor) found it an 'opening up' experience."

"Essentially, he'd had just the experience of Japan, although he'd been to Australia as a teenager, and I think it (the time the Emperor spent in Britain) opened him up to a more international experience," Stockwin said.

While saying that it was hard to say how much the experience influenced the Emperor's way of thinking, Stockwin concluded that the impact was considerable, as shown in "The Thames and I," a book written by the Emperor on his time at the university. Jiji Press