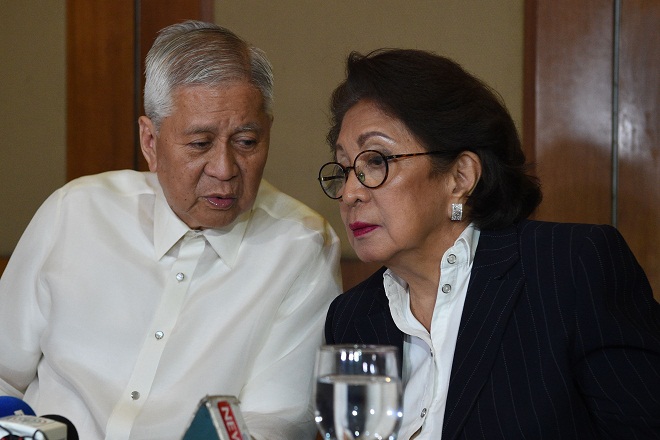 Former Philippine officials vowed on Friday to continue pursuing their petition against Chinese officials led by President Xi Jinping after the International Criminal Court dismissed their communication for lack of jurisdiction.

In a joint statement, former Foreign Affairs Secretary Albert del Rosario and former Ombudsman Conchita Carpio-Morales considered the report of ICC Prosecutor Fatou Bensouda not a dismissal of their communication.

"The Prosecutor welcomes 'new facts and evidence' to proceed with the case and we are providing them," they said.

"This has only strengthened our resolve," the two added.

In another statement, Morales said, "Let them gloat in the meantime. This is just the beginning."

In the Report on Preliminary Examination Activities 2019 issued on December 5, Bensouda said the Court has no jurisdiction over the case since the alleged crimes against humanity of the Chinese officials due to the reclamation and other activities in the South China Sea did not occur in the territory of the Philippines.

"In the present situation, the conduct alleged in the communication received did not occur in the territory of the Philippines, but rather in areas outside its territory, purportedly in its EEZ (exclusive economic zone) and continental shelf," she said.

She also said that China is not a signatory to the Rome Statute, which created the ICC.

The case stemmed from the communication filed by Del Rosario and Morales before the ICC last March, alleging that China has intentionally and forcibly excluded Philippine nationals from making use of the resources in certain relevant areas of the sea, such as blocking Filipino fishermen's access to traditional fishing grounds at Scarborough Shoal.

The communication also alleged that the Chinese officials were engaged in massive illegal reclamation and artificial island-building in the Spratly Islands, causing significant damage to the marine life in the areas; and tolerated and actively supported illegal and harmful fishing practices by Chinese nationals, which also has caused serious environmental damage.

Bensouda noted that the communication alleged that such conduct not only violated the law of the sea but also gave rise to crimes against humanity.

The Philippines and China are engaged in a territorial dispute in the South China Sea. Celerina Monte/DMS