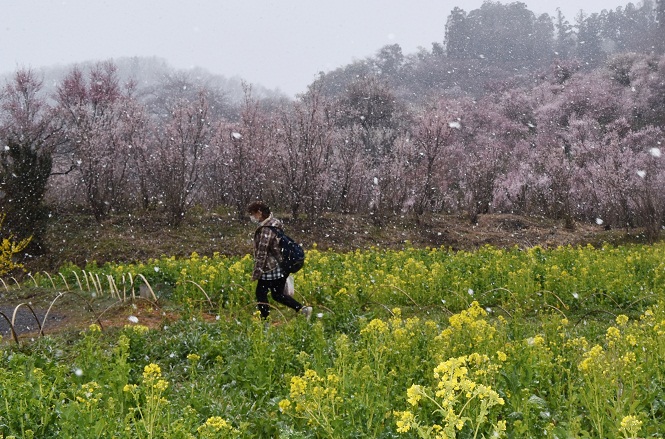 Tomioka, Fukushima Pref.--Evacuees viewed cherry blossoms Saturday in their hometown of Tomioka, part of which remains under an evacuation order since the 2011 nuclear accident, in Fukushima Prefecture for the first time in nine years.

Evacuees and others rode buses prepared by the Tomioka municipal government to travel along a row of cherry trees in the Yonomori district, not far from Tokyo Electric Power Company Holdings Inc.'s <9501> Fukushima No. 1 nuclear plant.

Most of the 2.5-kilometer-long row is within the no-entry zone where radiation levels are still high due to the March 2011 meltdowns at the plant following a massive earthquake and tsunami. The last time local residents enjoyed the Yonomori blossoms within the zone was in spring 2010.

A 55-year-old homemaker joined the tour with her family from the Fukushima city of Iwaki, to which she had evacuated from Tomioka.

Cherry blossoms in Yonomori "are always so beautiful" although fewer flowers are seen this year than before the disaster, she said.

Chisako Oiwa, 83, said the cherry blossoms were more majestic previously, adding that the trees growing in a place where no one lives look "lonely."

She lives in public housing in Koriyama, also Fukushima, as her original home in Tomioka sits in the no-entry zone. She said she used to walk under the cherry trees on her way back from shopping before the disaster.

Takashige Kawakubo, a 45-year-old Tokyo resident who often visited Tomioka as a volunteer, said that cherries are "blooming beautifully." He added he wants to do something for the town.

In April 2017, the evacuation order was lifted in most of Tomioka. Areas around the row of cherry trees are designated as a special reconstruction base by the central government. Decontamination work is progressing there.

Air radiation levels along the route of the buses stood at 0.2-0.5 microsievert as of February this year.

In Yonomori, a two-day cherry blossom festival is set to continue until Sunday. Along the cherry tree row, trees outside the no-entry zone will be lit up until April 14. Jiji Press