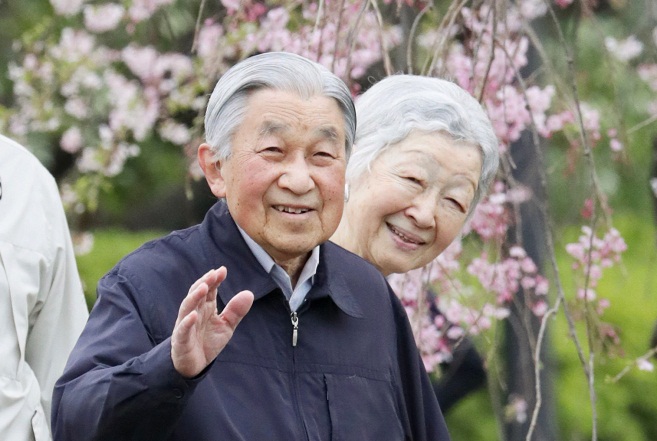 Tokyo--Japanese Emperor Akihito and Empress Michiko unexpectedly appeared outside the Imperial Palace, to take a walk, on Sunday morning, surprising people who happened to be at the scene, including joggers.

The Imperial couple routinely takes a walk inside the premises of the palace in Tokyo's Chiyoda Ward. It is rare for them to go outside of the estate for strolling.

The Emperor, wearing a black jacket, and the Empress, dressed in white, walked slowly, arm in arm, about 200 meters until they reached the Inui gate of the palace, watching blooming Somei-Yoshino and weeping cherry trees along the street with smiles.

Also during the 10-minute stroll, Emperor Akihito and Empress Michiko waved smilingly to joggers and others who looked surprised to unexpectedly see them. Later, they went back to the palace through Inui Street at the Imperial estate.

Madoka Hatasa, a 58-year-old doctor, who lives near the Imperial Palace, said: "The Emperor and the Empress looked really gentle. I was truly thrilled to see them."

Hatasa said she also saw the couple when she was walking her dog two years ago. At the time, the Empress told her that her pet was "very lovely," according to Hatasa.

Inui Street was opened to the public for nine days until Sunday, the last such opportunity during Japan's Heisei era, which ends on the day when Emperor Akihito steps down.

About 380,000 people visited the street during the nine days, according to the Imperial Household Agency.

Crown Prince Naruhito, 59, the eldest son of Emperor Akihito and Empress Michiko, is set to assume the throne on May 1, and the new era, Reiwa, starts on the day.

The Heisei era began on Jan. 8, 1989, a day after the current Emperor ascended to the throne following the death of his father, Emperor Hirohito, posthumously called Emperor Showa.

After the enthronement of Crown Prince Naruhito, Emperor Akihito and Empress Michiko will move and live in their temporary residence in Tokyo's Takanawa district as Emperor Emeritus and Empress Emeritus.

The upcoming Imperial succession will be the first from a living Emperor in Japan in about 200 years. Jiji Press