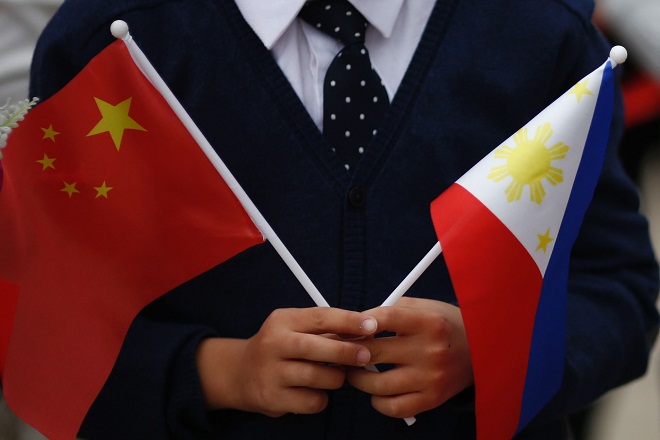 The Philippines and China have agreed to elevate their relationship into strategic cooperation. Chinese President Xi Jinping disclosed this during his joint press statement with President Rodrigo Duterte in Malacanang on Tuesday after their expanded bilateral meeting.

"Just now, the President and I had a friendly, in-depth and a productive meeting. We chartered the future course of China-Philippines relations and drew an ambitious blueprint for its development," Xi said.

"The President and I both agreed to elevate our relationship into one of comprehensive, strategic cooperation," the Chinese leader said.

"This vision charts a clear course for China-Philippines relations and it sends a strong message to the world that our two countries are partners in seeking common development," he added.

Currently, the Philippines has strategic partnership with the United States, Japan and Vietnam.

Xi vowed China would continue to provide more aids to the Philippines.

"As our two countries forge ahead as win-win partners, China will continue to do its modest best to help and support the Philippines," he said.

He also said China will lend a hand in the Philippines' counter-narcotics and counter-terrorism struggle, to the repair of roads and bridges in Marawi City and build new infrastructure in the war-torn area.

Xi also vowed China will import more goods from the Philippines as his government has approved importation of coconut and frozen fruits from Manila.

He said China will provide another 50 government scholarship grants for Philippine students on an annual basis from 2019 to 2021 and to implement arrangements for Filipino teachers of the English language to work in China.

Beijing will also donate 10,000 tons of rice to help the communities devastated by Typhoon Ompong recently, he said.

Xi also invited Duterte to attend the second Belt and Road Forum for International Cooperation next year in China where they would also discuss China-Philippine cooperation.

For his part, Duterte said Xi's visit gives the two countries new impetus to the mutual efforts to "enhance collaboration in ensuring the well-being of our peoples and contributing to peace and stability in the region."

He said he was pleased with the current positive momentum of the Philippine-China relations.

He said he and his counterpart discussed China's participation in the Philippine Build, Build, Build program.

Duterte, along with his common-law wife  Cielito "Honeylet" Avanceña, hosted a dinner for Xi and the members of his delegation in Malacanang.

Earlier in the day, Duterte, with daughter Davao City Mayor Sara Duterte-Carpio, welcomed Xi in Malacanang where he was given military honors. Celerina Monte/DMS