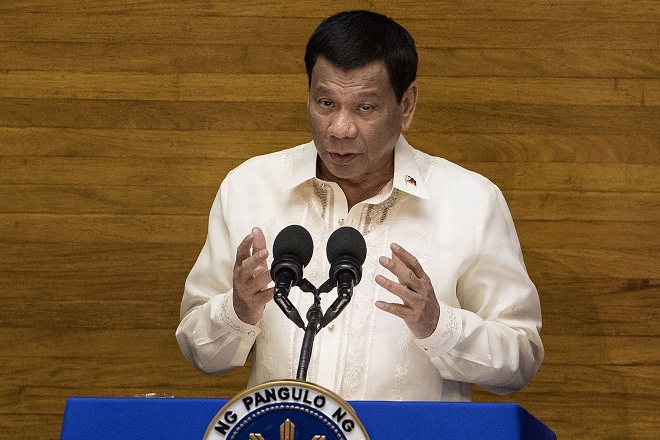 Duterte: War on drugs won’t be sidelined; to be “relentless, chilling”

In his third State of the Nation Address, Duterte said he could not be dissuaded by the critics, including the human rights groups and the church, on his intensified campaign against narcotics.

"Let me begin by putting it bluntly: the war against illegal drugs is far from over. Where before, the war resulted in the seizure of illegal drugs worth millions of pesos, today, they run [into] billions in peso value. I can only shudder at the harm that those drugs could have caused had they reached the streets of every province, city, municipality, barangay, and community throughout the country," he said in his 49-minute SONA at the House of Representatives in Quezon City.

"This is why the illegal drugs war will not be sidelined. Instead, it will be as relentless and chilling, if you will, as on the day it began," he said.

He said the drug dealers know fully well that their business is against the law.

Duterte again hit those who have been critical of the war on drugs.

"When illegal drug operations turn nasty and bloody, advocates of human rights lash at—and pillory—our law enforcers and this administration to no end. Sadly, I have yet to hear really howls of protest from the human rights advocates and church leaders against drug-lordism, drug dealing and drug pushing as forceful and vociferous as the ones directed against the alleged errant [law] enforcers in the fight against this social scourge," Duterte said.

"If you think that I can be dissuaded from continuing this fight because of [your] demonstrations, your protests, which I find, by the way, misdirected, then you got it all wrong. Your concern is human rights, mine is human lives," he stressed.

Duterte reiterated that because of illegal drugs, the lives of the youth were being wasted and families were destroyed.

For him, Duterte said human rights means giving Filipinos, especially those at the society’s fringes, a decent and dignified future through social and physical infrastructure necessary to better their lives.

Since Duterte assumed office in June 2016, over 4,000 people have been killed in his war on drugs. Celerina Monte/DMS