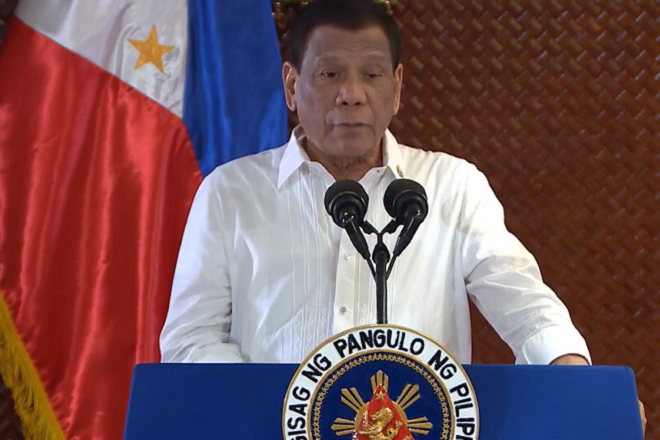 President Rodrigo Duterte said he would come out with a policy directive removing brokers and examiners at the Bureau of Customs to prevent corruption.

Duterte told reporters Tuesday night corruption usually occurs during the computation of the taxes to be paid to the government.

He said the taxes were being computed based on the net, meaning after some deductions have already been made.

"That's where the problem occurs as to how much," Duterte, said as he stressed that he wants taxes to be based on gross.

"Take away the brokers and you would have cut corruption overnight. In a scale of 1 to 10, maybe you have reduced corruption to about 8 --- 8 and one half," the President added.

Asked if a law is needed to implement reforms at the BOC, he said he could just issue a directive.

"I am the executive of this government. There are things which I have to do that Congress cannot tinker with. Those are one of them because that is to save the country from perdition," he said.

But Duterte said Congress could still pass a law. However, he said he would not longer wait for that.

Duterte earlier placed several employees of the BOC under the floating status due to the alleged corruption in the agency.

Meanwhile, Duterte said he sacked Jose Antonio E. Goitia as the Executive Director of the Pasig River Rehabilitation Commission because "he's telling people that he will be appointed Customs collector. And already was collecting."

He said he also ordered the concerned agency to look into the Commission for other possible irregularities. Celerina Monte/DMS