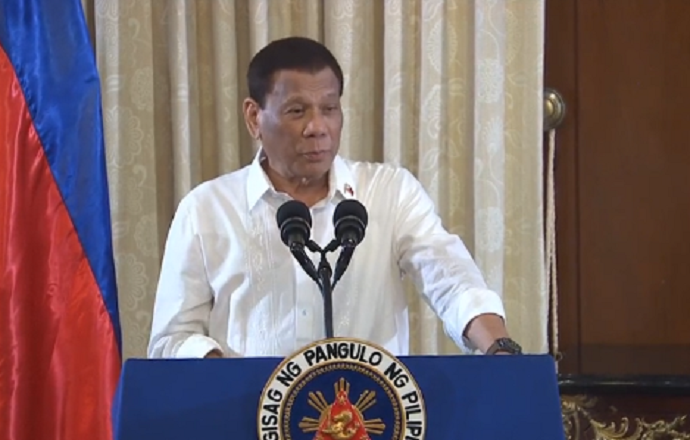 President Rodrigo Duterte said the arbitral ruling will be the top agenda on his coming visit to China, vowing that he would not allow Beijing to stop him from bringing up the matter.


In a speech in Romblon on Wednesday night, Duterte said China could not just "talk air" without addressing The Hague ruling.


"I'm going to China. And the first thing that I will bring out before them, the arbitral ruling," he said.


Duterte is set to visit China on August 28 to September 2.


In the July 2016 ruling, the Permanent Court of Arbitration ruled in favor of the Philippine petition, invalidating China's historic and sovereign claim in almost the entire South China Sea through its nine-dash line.


"So, I will ask them, as what you said and what we have agreed upon, we talk to resolve this problem peacefully. Now, how, tell me, how do we start to solve the problem peacefully. There has got to be something. You just cannot talk air," Duterte stressed.


Contrary to his earlier reasoning he could not insist yet on arbitral ruling as war could break out, this time, Duterte said when he raises the PCA award on the Philippines, it would not mean that the government would go to war.


"So we do not go to war, okay? I cannot really go to war with them. I will just feed my army and the military and the police to the mouths of hell. They will all be killed at this time," he said, adding that he would tell Chinese President Xi Jinping to resolve the matter peacefully.


Duterte said if China would again tell him not to talk about the United Nations arbitral ruling, he could not be stopped.


"If I'm not allowed as a President of a sovereign nation to talk whatever I want to talk about, then let us not rather talk altogether...do not control my mouth because that is a gift from God," he added.


"So whether you like it or not, will it make you happy or not, angry or otherwise, I’m sorry. But we have to talk the arbitral ruling then what we get if there is a start in the exploration and in the extraction of whatever worth there is in the bowels of the earth," Duterte said.


He said the proposed 60-40 sharing in favor of the Philippines would be a good start.


"Any other adventures or expeditions in the marine oceans or our exclusive zones, economic zones will have a direct bearing on that arbitral ruling. I won't agree to just TY (thank you)," he said.   Celerina Monte/DMS