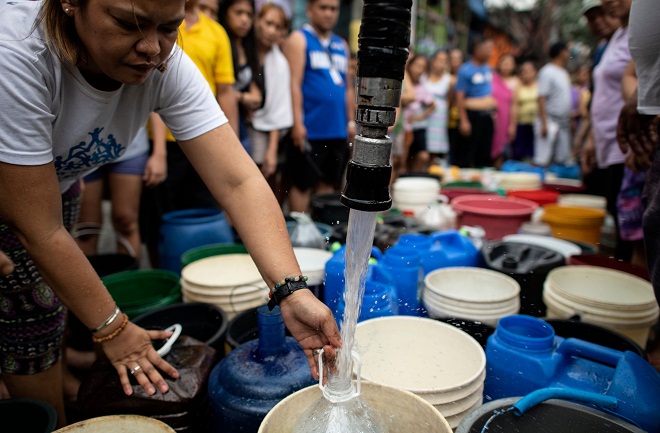 President Rodrigo Duterte warned on Tuesday Manila Water and Maynilad Water Services they would be charged with economic sabotage.

Duterte, in a speech in Malacanang after signing two bills into law, said he would make sure that those responsible for milking the Filipinos billions of pesos would be sent to jail.

"We are being milked by billions and we are being asked to pay fines and penalties," he said, stressing that the water is owned by the state and the two water concessionaires only signed their respective contracts to be the distributor.

"But they were treating as if it was a mining gold or diamond. The contracts were in their favor because if they fail to realize the profit, enduring the lifetime of the contract or at any period, we have to pay for their losses," Duterte said.

These were the findings made by the Department of Justice, which studied the 1997 concession agreements with Maynilad and Manila Water following the President's order.

"And I will insist that they be tried for economic sabotage...I will file this (case). Economic sabotage and I will arrest them, all of them. I will let them feel the life inside the prison," he said.

Duterte said he is also ready to be imprisoned for his acts.

He said the Ayala-led Manila Water and Pangilinan-led Maynilad have to accept the amended contract or he would really charge them with economic sabotage.

"You know that Ayala, they do not pay...look where Ayala is. I will go to him. They do not pay corporate income tax...they've been collecting for years to treat the water before it flows to the Manila Bay," he said, adding, however, that there was no water treatment.

"I will give you one slap each...I will show to the Filipinos how to slap millionaires, billionaires...you will kill me or son of a b****, I will kill you," he added.

An arbitral tribunal in Singapore recently ordered the Philippine government to pay Manila Water P7.4 billion for breach of obligation when it disapproved the rate hikes for four years, resulting to the private firm's losses.

On the other hand, Manuel Pangilinan is the chairman of Maynilad, which has concession in the west zone of Metro Manila and nearby provinces. Celerina Monte/DMS