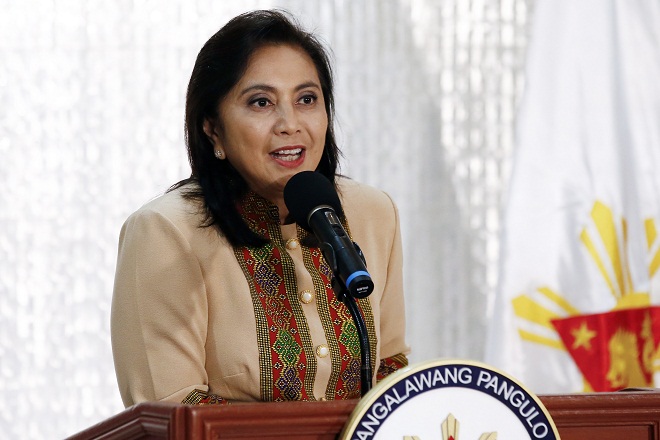 Duterte says “good” for Robredo to be drug czar

President Rodrigo Duterte has lauded Vice President Leni Robredo's acceptance of his offer to be the drug czar, Malacanang said on Thursday.

In a press briefing, Presidential Spokesperson Salvador Panelo, however, said that if UN special rapporteur Agnes Callamard seeks Robredo's approval to continue with her plan to investigate alleged extrajudicial killings in the Philippines, the vice president would have to abide by whatever would be Duterte's policy.

"When it’s a government policy, then all officials will have to follow the policy...the policy of the President, that he doesn't want these people intruding into the affairs of the state," Panelo said.

Callamard has long been asking the Philippine government to allow her investigate the administration's bloody war on drugs.

But Duterte has brought up several conditions before granting Callamard's request, including a public debate with him.

Callamard, however, did not want any precondition before she could perform her job.

"With the Vice President at the helm of the anti-narcotics campaign, President Duterte expects that the former would see the realities on the ground, particularly with respect to the government's position against extrajudicial or state-sponsored killings, and understand that deaths occur due to the violent reactions on the part of agents of the illegal drug trade against the strict enforcement of the law," he said.

Robredo was offered the post amid her continuous criticisms on the government's bloody war on drugs.

She has sought that the campaign against illegal narcotics be reassessed, citing the increasing number of people being killed while the number of drug users rises also. Celerina Monte/DMS