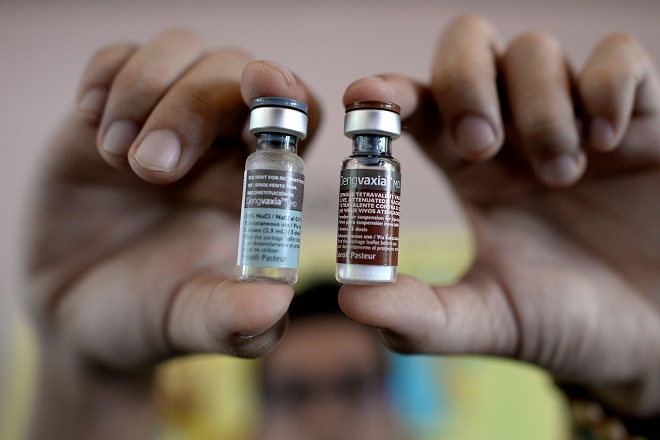 The Dengvaxia  dengue vaccine remains banned in the Philippines.

The Department of Health (DOH) on Thursday denied the appeal of Sanofi Pasteur to reverse the decision of the Food and Drug Administration (FDA) revoking the Certificate of Product Registration (CPR) of Dengvaxia and Dengvaxia MD.

In a statement, DOH Secretary Francisco Duque III said has upheld the FDA's permanent revocation of the CPRs of two dengue vaccines due to the failure of manufacturer, Sanofi Pasteur, to submit post-approval requirements.

"The efficacy of the Dengvaxia itself is not in issue in this case. The decision concerns Sanofi’s complete disregard of FDA regulations, which were precisely put in place by law to ensure safety,” said Duque.

Duque said as a holder of the CPRs for Dengvaxia and Dengvaxia MD, Sanofi is bound by post-marketing commitments, including the submission of Risk Management Plans.

Sanofi has submitted the first and second versions of the plan, but Duque said it did not submit the third version, and has belatedly submitted the fourth, in violation of its post-marketing commitments and FDA rules and regulations.

"Given that Dengvaxia is an innovative drug, the importance of complying with these post-marketing commitments is critical to public safety," said Duque.

Duque said the decision is without prejudice to Sanofi Pasteur applying for a new license from FDA.

"It (Sanofi) may re-apply for new CPRs, faithfully complying with all relevant laws, rules, and regulations," he said.

"According to Usec. Eric Domingo, who is now the concurrent OIC of FDA, it will probably take anywhere from three to six months to process a CPR in case this gets applied for," said Duque in a separate interview.

In 2017, the FDA had suspended the CPR of Dengvaxia and, revoked it last February due to the controversial mass dengue immunization program of the health department.

Three weeks ago, however, Sanofi Pasteur had filed an appeal before Duque, as provided by existing rules, for the lifting of the ban.

This came amid a recent push to reinstate Dengvaxia by several medical groups due to the recent declaration of a national dengue epidemic by the health department.

In a separate statement, Sanofi Pasteur welcomed the decision of the DOH saying it provides clarity on their next move with regards to the dengue vaccine.

In particular, the firm said it gives them optimism they have a good chance of reintroducing Dengvaxia to the Philippines in the near future.

"We are grateful to the DOH for recognizing that the safety of Dengvaxia is not on trial, and for emphasizing the dire need to have a dengue vaccine introduced or – in the case of Dengvaxia – reintroduced in the market," it said.

"We are confident in the public health value of this vaccine," said Sanofi. DMS