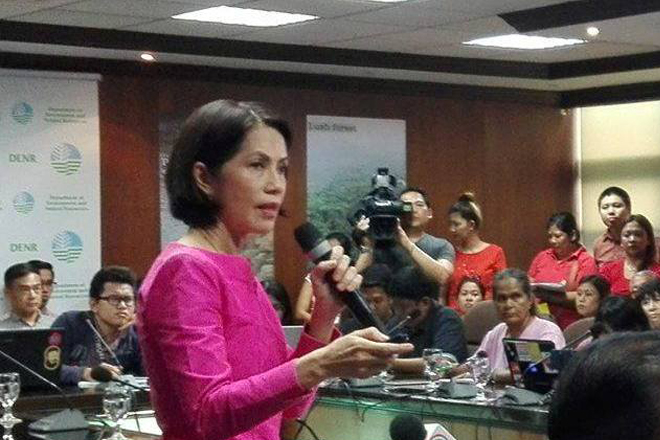 Environment Secretary Gina Lopez has issued show cause orders to 22 mining companies for failure to deposit rehabilitation fund of at least P3 billion in a government depository bank.

In a press conference at the Department of Environment and Natural Resources (DENR), Environment Undersecretary Maria Paz Luna said only about P500 million fund has been placed by the mining firm in the bank.

She said the show cause orders were issued on February 14 to the 22 mining companies for violation of Section 71 of Republic Act 7942 or the Philippine Mining Act of 1995 on the implementation of the Final Rehabilitation/Decommissioning Fund.

"Mining companies have recourse, either by filing a motion for reconsideration with the Secretary or an appeal to the Office of the President, as a component of due process," she said.

Section 71 of RA 7942 read as "contractors and permittees shall technically and biologically rehabilitate the excavated, mined-out, tailings covered and disturbed areas to the condition of environmental safety, as may be provided in the implementing rules and regulations of this Act."

"A mine rehabilitation fund shall be created, based on the contractor's approved work program, and shall be deposited as a trust fund in a government depository bank and used for physical and social rehabilitation of areas and communities affected by mining activities and for research on the social, technical and preventive aspects of rehabilitation."

The law provides that failure to fulfill the obligation shall mean immediate suspension or closure of the mining activities of the contractor/permittee concerned.

The DENR has yet to give the list of the 22 mining companies.

But Luna said some of the 22 could be among those 23 mining firms which Lopez ordered closure or the five others, which were ordered to be suspended.

Luna showed to the media thick documents containing the reports on how the DENR conducted the audit of 41 mining firms since July and the bases for Lopez's order against some of them.

She said anyone is free to look into the documents, which will show that the DENR exercised due process before ordering the closure or suspension of the 28 mining sites.

She also said that the multi-stakeholder review spearheaded by the Mining Industry Coordinating Council (MICC) was just adding "another layer" to the investigation.

Luna insisted whatever would be the findings of the MICC would just be recommendatory in nature.

"Perhaps, they (MICC) trying to assuage the fears of the indistry," she added. Celerina Monte/DMS