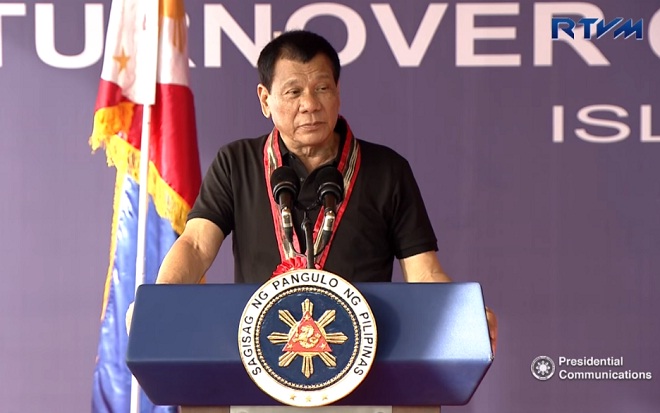 "There seems to be a misunderstanding between the Foreign Department, Foreign Affairs Department of the government of the Republic of the Philippines...the problem is I think Secretary (Perfecto) Yasay (Jr) was misunderstood by the Chinese government," Duterte said in a speech during the turnover of a drug rehabilitation facility of the Federation of Filipino-Chinese Chamber of Commerce and Industry in Davao del Norte.

Duterte was referring to the recent strong statement made by Yasay against China's 'militarization" on its man-made islands in the disputed South China Sea.

"(Chinese) Secretary of Commerce who's supposed to be here today cancelled his trip. I don't know for what reason. But I said if the reason is because of misunderstanding, I will not deviate from my word of honor," he said.

He said he will honor his promise to Chinese President Xi Jinping that he would not raise yet the July 2016 arbitral award on the Philippines regarding its territorial disputes with China in the South China Sea.

Duterte said he wants to have "good relations" first between the Philippines and China.

"We should be friends first so that when we face each other, we have the respect and there is dignity on both sides," he said.

The president reiterated that under his presidency, he will raise the issue of the arbitral judgment with China, but not now.

Gao, along with a large delegation, was supposed to arrive in Manila on Thursday. But a last minute cancellation was made reportedly after Yasay's statement against China.

Trade and Industry Secretary Ramon Lopez had said Gao's trip was just moved due to their internal meetings in China. The trip could take place  by first week of March. Celerina Monte/DMS