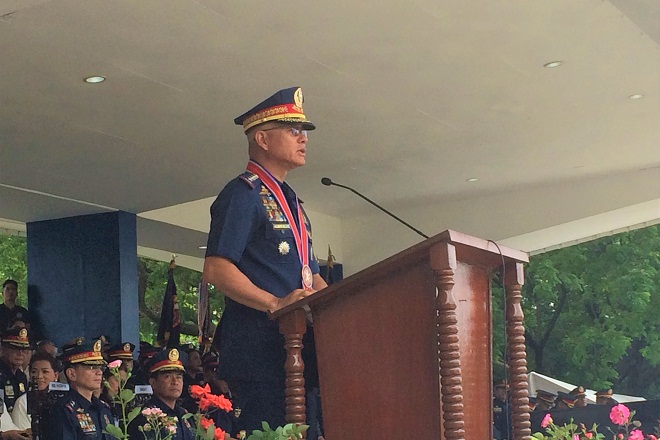 During NCRPO’s 118th Police Service Anniversary, Albayalde congratulated them for being the Best Police Regional Office (PRO) in the country.

“I am glad to see that this police office has been scaling new heights of performance and achievement in the pursuance of its mission these past few years,” he said.

“In the remaining months of my term, I hope to see the NCRPO rise to even greater heights of success in the pursuance of its mandate,” he added.

Albayalde, who will reach the mandatory retirement age of 56 on November 8, was the NCRPO chief before being promoted as chief of the PNP.

He said he wants the NCRO to remain as a model of excellent and honourable service.

“And I know that you can achieve this if you continue to be united, to work hard and serve the community along the ideals of service, honor and justice, and with the Lord at  the center of all your endeavors,” he said.

QCPD, Valenzuela and Novaliches police stations got the award for units with highest accomplishment in Project Double Barrel.

“I hope you will remain hardworking, great and honorable in serving the people and continue to become an example to you co-police officers,” said Albayalde.

The NCRPO chief, Major General Guillermo Eleazar, expressed his profound gratitude to everyone especially to President Rodrigo Duterte and to Albayalde for  all-out support to all undertakings of the NCRPO.

Eleazar also thanked 26,766 gallant men and women of the NCRPO for their dedication to duty; to local government units, non-government organizations, media, stakeholders and the public for their trust and support to NCRPO. Ella Dionisio/DMS