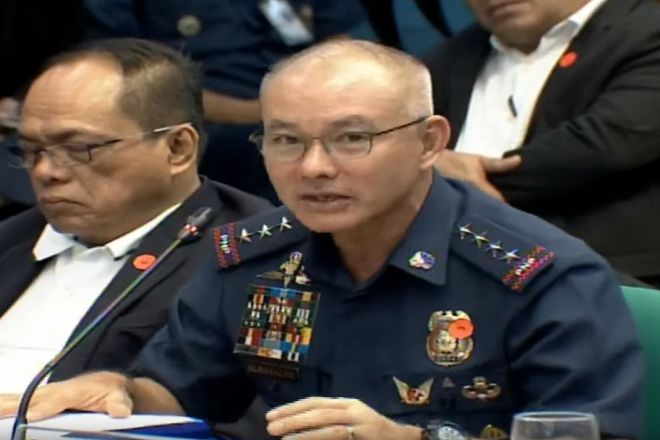 Police General Oscar Albayalde on Wednesday denied before a Senate hearing he is favoring the 13 cops involved in the controversial 2013 Pampanga drug raid adding he will fire them once investigation shows they are linked to illegal drugs.


The Philippine National Police (PNP) chief made the statement after senators questioned not only the demotion of the cops but also their sudden re-assignment to Luzon.


According to Albayalde, he received a request letter from Pampanga provincial prosecutors office ordering the 13 cops to return as they are witness on the drug cases they filed when they were still assigned in the province.


"I did not allow it and instead transferred them to other nearby regions where they can still attend their court duties," Albayalde said.


However, as senators looked into the letter, they found out the leader of the raiding team, Police Major Rodney Baloyo, was not included.


Albayalde said they also received a letter from Baloyo's attorney which was the reason he was sent to Tagaytay City from Mindanao.


Senator Franklin Drilon then questioned Albayalde if he is favoring Baloyo.


"It's not a special treatment, Mr. Chairman... He was not favored because the transfer we are doing goes to everybody," Albayalde said.


Drilon also asked Albayalde why they entertained requests from private individuals whose motive is other than public welfare.


"Again, this strengthens our suspicion that this group is favored. This group is given preferential treatment when all the circumstantial evidence point to them," Drilon said.


Senator Panfilo Lacson Jr. asked Baloyo if he knew the prosecutor who requested for their return in their previous assignment but the police officer said he did not know that person.


Lacson also questioned Albayalde if they received the same request for other police officers transferred to other assignments.


"Did you receive a letter coming from Antipolo, Tagatay, Baguio, Pampanga? I think they are not the only ones who are witness on cases... So this request is only for them," said Lacson.


"I don't received any (request) as far as my term as chief PNP," he told the senator.


Albayalde said  the regional directors will decide where police officers are going to be assigned.


Albayalde also said he will sign any dismissal order that will be released against the cops.  "I will sign it, Sir," he told Lacson.


The Departments of Justice and Interior and Local Government and National Police Commission are reviewing and investigating  the 2013 raid where it was claimed that 160 kilos of illegal drugs were missing.


The 13 cops are on floating status and held at PNP's Personnel and Holding Accounting Unit.


"They are under strict monitoring," Albayalde reiterated.


Senators who are investigating the "ninja cops" believed there is a "cover up" on the 2013 Pampanga drug raid where the group of Baloyo did not report the whole incident and allegedly set the drug lord, Johnson Lee free in exchange of P50 million.


As the hearing progressed, senators  found that a weak case was filed against the cops which resulted in demotion and not dismissal.


But based on the timeline of implementing the dismissal order, senators asked the PNP why it took them so long to implement the order.


It was found that aside from the repeated reviews, the order was neglected by previous regional directors who claimed Albayalde talked to them asking for a favor on the issue.


However, former PNP chief Allan Purisima and even Baguio City mayor Magalong, ex-CIDG chief, said they did not have not enough evidence to show  Albayalde's involvement.


The Senate Blue Ribbon Committee is set to release their report soon. This will be submitted to Interior Secretary Eduardo Año who was tasked by President Rodrigo Duterte to investigate the case before he decides on the fate of Albayalde who is retiring on November 8.


The PNP chief said he will respect the decision of the president. Ella Dionisio/DMS