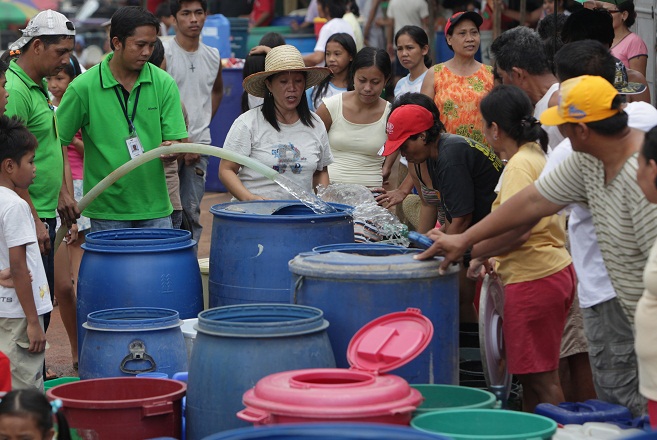 Around 285,000 residents in Quezon City are affected by shortage of water.

In a phone interview with The Daily Manila Shimbun, Quezon City's public information officer Ares Gutierrez said of the 142 barangays, 82 were affected by lack of supply from Manila Water.

"We are asking the Manila Water to give us the specific areas of their clients," Gutierrez said.

He said areas are experiencing different levels of water shortage.

He said some areas have no water, some has little supply while others are getting theirs through scheduled water rotation.

Gutierrez said Manila Water assured them their priority is to ease the suffering of residents.

"During a meeting, they told us the problem is looking for a new source of water supply," he said. "That's why they can't assure us of (service) restoration," he added.

Quezon City is hoping there will be improved supply within a week to "lower the number of barangays affected."

"We wanted to as much as possible, all the barangays will be given remedy," he added.

Quezon City will coordinate with Manila Water and Maynilad plus their local fire units to assure all residents will have water.

Gutierrez said there is a "sudden breakdown of communication" between the LGU ( local government unit) and Manila Water.

"They told us that they gave advisories to local government but they cannot pinpoint to whom they gave it," he said.

Some parts of Quezon City have been experiencing water shortage since last week.

He said hospitals' water supply are experiencing improvement after being prioritized by the Manila Water.

Specialized hospitals, such as the National Kidney and Transplant Institute, National Heart Center and Lung Center of the Philippines ,are located in Quezon City. Ella Dionisio/DMS