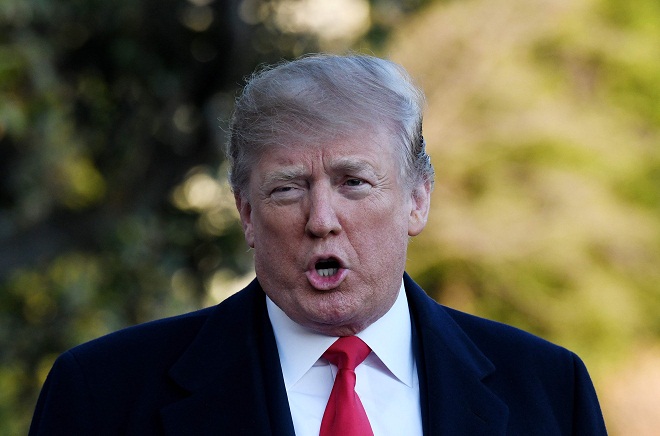 Trump may present trophy to winner of sumo tournament

Tokyo--U.S. President Donald Trump may present a specially made trophy to the winner in the makuuchi top Japanese professional sumo division at the ongoing summer grand tournament on May 26, the final day of the competition, it has been learned.

The U.S. leader is considering getting onto the sumo ring to directly give the "Trump cup" to the winning wrestler at the victory ceremony to be held right after the end of all bouts of the 15-day tournament at the Ryogoku Kokugikan arena in Tokyo, Japanese government officials said.

The move is intended to demonstrate the strength of the Japan-U.S. alliance, according to the officials. Japanese Prime Minister Shinzo Abe is set to hand the prime minister's cup to the makuuchi winner on the ring at the ceremony.

Trump is scheduled to visit Japan on May 25-28 as the first state guest since Japan's new Emperor Naruhito assumed the Imperial throne on May 1. Trump plans to visit Ryogoku Kokugikan with Abe to watch sumo matches on May 26.

The Japanese side hopes that the trophy presentation by Trump will help deepen his understanding of Japanese culture and further strengthen trust between the two leaders, the officials said.

Previously, the French president's cup, launched by former French President Jacques Chirac, known as a sumo fan, was presented to the makuuchi division winner at every grand sumo tournament between 2000 and 2007. A total of six grand tournaments take place every year, bimonthly.

During his upcoming Japan visit, Trump will meet with the new Japanese Emperor and attend a banquet at the Imperial Palace in Tokyo.

Abe and Trump are slated to hold bilateral summit talks. They may also play golf together and board the Maritime Self-Defense Force destroyer Kaga. Jiji Press