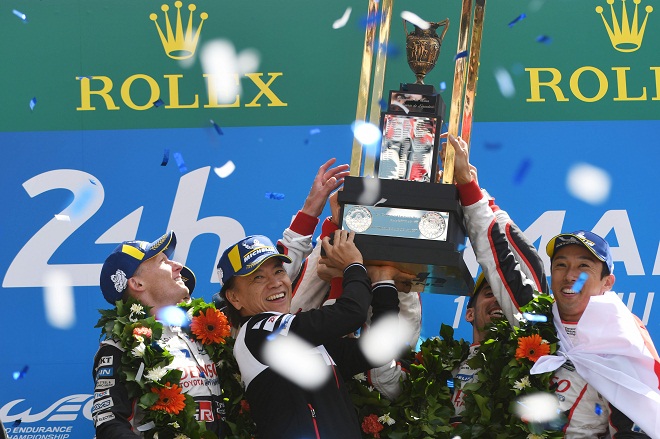 Moreover, Toyota Gazoo Racing's two TSO50 hybrid cars made a one-two finish in the top LMP1 category at the 86th Le Mans 24 Hours, leaving their rivals in the dust after completing on Sunday 388 laps at the 13.626-kilometer Sarthe circuit in Le Mans, western France.

The winning vehicle, the No. 8 car, was driven by Kazuki Nakajima of Japan, Fernando Alonso of Spain and Sebastien Buemi of Switzerland, and the runner-up, the No. 7 car, by Kamui Kobayashi of Japan, Jose Maria Lopez of Argentina and Mike Conway of Britain. The No. 7 ended the race only two laps behind the No. 8.

Toyota became the second Japanese automaker to win one of the world's three most prestigious races after Mazda Motor Corp. <7261>, which earned the title in 1991.

"It took a bit too long (for Toyota to win the race)," Nakajima, the third Japanese driver to stand on the top of the podium in the Le Mans history, said. "But it's nice to see the long-cherished dream of many people come true."

Two years ago, Nakajima led the race until last three minutes but failed to win due to a mechanical problem. Toyota also missed a victory last year, although it put three cars in the competition.

In a press release on Monday, Toyota President Akio Toyoda said to the drivers, "Thank you for driving all out." Jiji Press