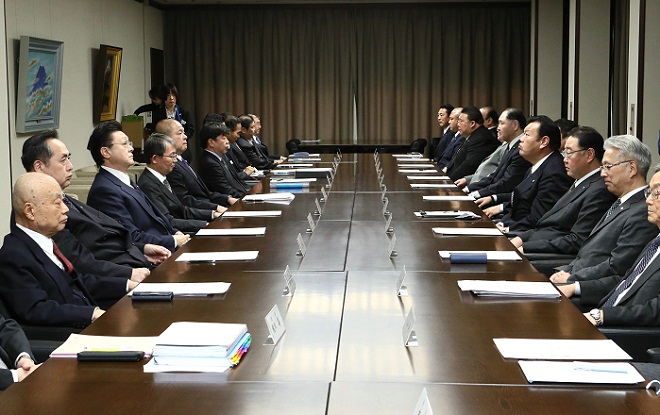 Sumo ass’n puts off action against Takanohana over Harumafuji case

Tokyo- The Japan Sumo Association at an extraordinary board meeting on Wednesday put off its decision on its possible action against Takanohana, stablemaster of Takanoiwa, over former yokozuna grand champion Harumafuji's assault on the junior wrestler.

Some in the association have rapped Takanohana, chief of the professional sumo-governing body's local tours, for failing to fulfill his responsibility of reporting to the group the assault case, which happened while wrestlers were on a regional sumo tour in late October.

At an extraordinary meeting of the yokozuna promotion council, held earlier on Wednesday, most of its members criticized Takanohana, saying that he failed to meet his responsibility as a board member of the sumo association.

The board of the association has received a final report from its crisis management committee on the investigation of the assault case. But it refrained from making a decision on its action against Takanohana, because the committee has still been unable to interview the stablemaster.

On Harumafuji's violence against Takanoiwa, the committee said, "Using violence can never be tolerated for any reason."

Harumafuji's use of violence by itself deserves strong condemnation, the committee added. Harumafuji retired from the professional sumo world late last month to take responsibility for his assault on Takanoiwa.

Both Harumafuji and Takanoiwa are from Mongolia. The incident happened over drinks in the western Japan city of Tottori during the sumo tour.

At the meeting, the association decided to slash pay for yokozuna Hakuho and Kakuryu, acting on the council's view that the two Mongolian grand champions, both of whom took part in the drinking party, had a chance to stop Harumafuji.

For Hakuho, all of his pay for January and half of his February salary will be cut. Kakuryu will have the whole of his January pay reduced.

Hakkaku, chief of the association, will receive no pay for the remaining three months of his term. Jiji Press