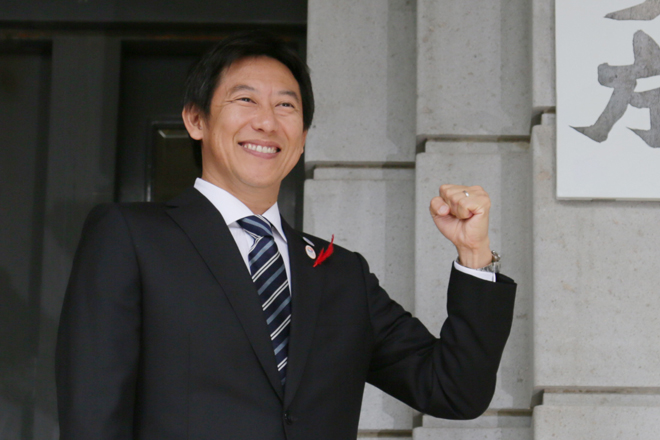 TOKYO- The Japan Sports Agency is resolved to offer maximum support for Japanese Olympians and Paralympians to facilitate the best results at the Tokyo Games, Olympic gold medalist Daichi Suzuki, who now serves as commissioner of the agency, said in a recent interview.

Surveys find that many people want to see Japanese athletes do well in the 2020 Olympics and Paralympics, said Suzuki, who won a gold medal in men's 100-meter backstroke in the 1988 Seoul Olympics.

"We will fully support Japanese athletes so that they can perform brilliantly in the Tokyo Games," Suzuki stressed.

With only three years left before the quadrennial sporting events, "we have to make the Tokyo Games successful through 'all Japan' (efforts)," he said.

Feeling that an enthusiasm gap exists between Tokyo and rural areas regarding the 2020 Games, Suzuki said his agency aims to spread benefits from the events across the country as much as possible.

He said he wants to create more opportunities where Olympic and Paralympic athletes interact with people in rural areas after the quadrennial events.

Also in the interview, Suzuki expressed hopes that one of the possible legacies of the Tokyo Olympics and Paralympics will be that "Japanese people better understand the benefits of sports amid swelling medical expenses."

Suzuki said he aims to create a virtuous circle in which sports are promoted with the use of funds procured from cuts in medical costs.

He cited data suggesting that medical care costs for people enjoying sports on a regular basis are lower than those for people who are usually sedentary.

While the year 2020 will be an important milestone for the sports community, efforts to strengthen the competitiveness of Japanese athletes and promote sports in the country will continue even after that year, Suzuki said.

"We should think about what we should do in respective positions so that sports will develop further in this country in 2021 and beyond with people attaching high value to the sector," he said.

Underlining the need to increase the number of events in which Japan can win Olympic and Paralympic medals, Suzuki pointed to badminton, table tennis and tennis as promising sports for Japanese athletes. Jiji Press