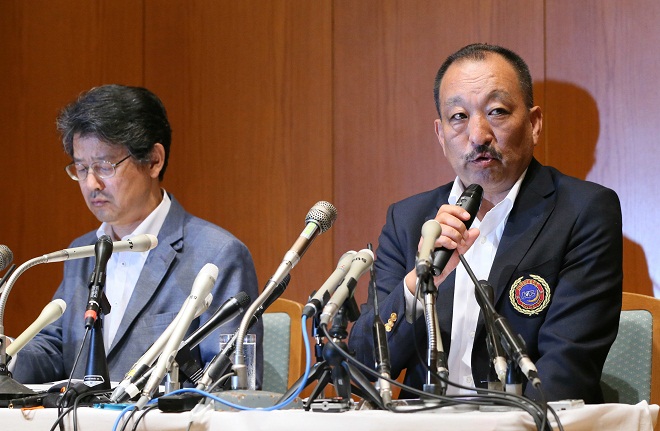 Nishinomiya, Hyogo Pref.- Kwansei Gakuin University's American football team said Saturday that it can hardly accept Nihon University's second reply to the team's inquiries about the much-heralded dangerous tackle against its quarterback in a recent match.

Holding a press conference on the Kwansei Gakuin campus in Nishinomiya, Hyogo Prefecture, western Japan, the team's director Hiroshi Ono said the latest written answer by Nihon University, based in Tokyo, "contains many discrepancies (with explanations made by the player who did the dirty play) and, thus, cannot be taken as telling the truth."

"As we see no good reason (in the answer) to believe that the leader (of the Nihon University Phoenix) has told the truth, we can hardly accept it as a sincere response," Ono went on to say.

Then the Kwansei Gakuin team announced that it decided not to play regular matches with the Nihon University team until their mutual trust is fully restored, stressing that the safety of its members cannot be guaranteed under the current circumstances.

Nihon University said in the response letter that it could not confirm whether Phoenix coach Masato Uchida had encouraged the player in question to do the foul play in the regular match on May 6, which caused an injury to the Kwansei Gakuin quarterback.

In response to the Kwansei Gakuin team's inquiries about the cause of the rough play, Nihon University first explained there was a perception gap between the coach and the player.

The Nihon University player told a press conference on Tuesday that he was instructed by the assistant coach and Uchida to "crush" the Kwansei Gakuin quarterback. But Uchida denied the allegation at a separate news conference the following day. Jiji Press