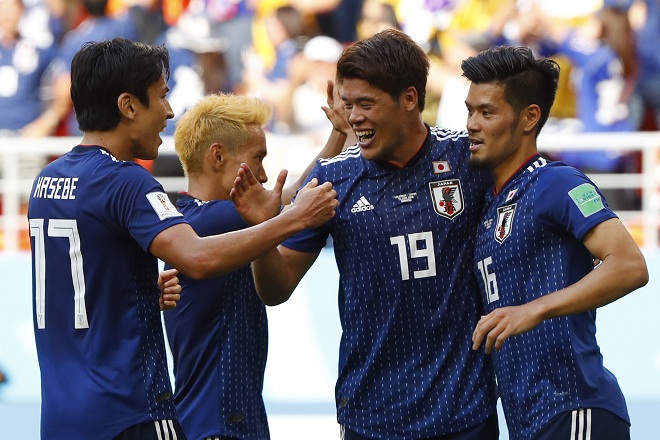 Volgograd, Russia- Supporters of Japan's national soccer team revealed mixed feelings when they saw the team, nicknamed Samurai Blue, advance to the knockout stage of the 2018 World Cup in Russia after "willfully" losing its final Group H match with Poland on Thursday.

In the last minutes of the match, Japan held onto the ball and refrained from going on the offensive, although it was one goal behind Poland. This was a tactic to avoid any more goals and any more fouls, while leaving its fate to the simultaneously-held Group H match between Colombia and Senegal.

Japan's risky game paid off because Colombia beat Senegal 1-0. But Japan could have advanced to the round of 16 with a win or draw in the match with Poland. Senegal would have reached the final round, instead of Japan, if it had not lost to Colombia.

The Japanese team faced fierce criticism after the match. A Russian newspaper called the match a "scandal," condemning both Japan and Poland, which dared not seek more goals, for disrespecting the sport. It added that Japanese players no longer deserve to be called samurais.

"It was not soccer. It won't offer dreams to children," said Ruiji Kojima, 21, who came from the western Japan city of Kobe to watch the Japan-Poland match. Kojima said he started playing soccer after being impressed by Japan's performance in the 2002 World Cup, jointly hosted by Japan and South Korea.

"I've never heard such loud boos," said Yoshio Inukai, 47, from Kurashiki, Okayama Prefecture, referring to boos against the Japanese team during the match.

"Some people say that the result is everything, but I would prefer a defeat as a result of aggressiveness," Satoru Owada, 29, from Hiratsuka, Kanagawa Prefecture, said. "I have mixed feelings, despite the team's progress."

"I understand that they were focused on progressing (to the next round), but, to be honest, I'm not happy," Shintaro Ogura, 27, a friend of Owada, said. "I wonder what children thought after watching the match."

Meanwhile, Masato Yokouchi, 35, from Saitama Prefecture, claimed that the result was everything for the Japanese team, given the replacement of its coach only two months ago. "I was rather impressed that Japan played such a clever game."

At a press conference following the match, Japan coach Akira Nishino said he took a "very difficult decision" in order to advance to the next stage, but admitted that he also felt some regret.

"We hope to be more aggressive in the next match," Nishino said.

Veteran midfielder Keisuke Honda, who was on the bench during the match, defended Nishino's decision. "If I were coach, I couldn't have done the same. I thought he was amazing."

"Soccer is entertainment. But I want you to understand that we can't entertain you unless we advance to the next stage," Honda said. Jiji Press