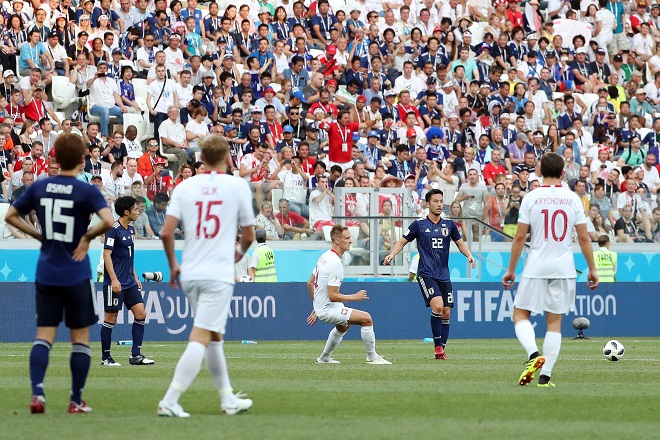 Volgograd, Russia- Japan narrowly progressed to the last 16 at the FIFA World Cup in Russia despite its 1-0 defeat to Poland in their final match in Group H on Thursday.

It is the third time for the Samurai Blue to reach the knockout phase of the quadrennial international soccer tournament. Japan last did so in the 2010 event in South Africa.

Japan ended the group stage with one win, one loss and one draw, winning a total of four points.

In the other Group H match on Thursday, Colombia edged Senegal 1-0. As a result, the South American country won the group, with six points, cruising into the round of 16.

After all matches were played in Group H, Japan and Senegal finished level on points, goal difference and goals scored. But the Asians topped the West Africans on fair play points, calculated based on factors including the number of yellow cards, finishing runner-up in the group and advancing to the knockout stage, which is set to start on Saturday. Japan is the only team from Asia in the last 16.

According to FIFA, Japan is the first to secure a round of 16 spot on fair play points in the history of the World Cup.

In the soccer World Cup, the top two teams from each of the eight groups qualify for the knockout stage. Each group consists of four teams.

"The team's performance was not necessarily satisfactory, but we have a strategy as we aim to reach higher stages in the tournament," Japan coach Akira Nishino told reporters after Thursday's match.

"It was a difficult match," Makoto Hasebe, captain of the team, said. "We'll keep working toward the round of 16."

In the group phase at the ongoing tournament, Japan, which is 61st in the FIFA rankings, defeated 16th-ranked Colombia 2-1 and drew with 27th-ranked Senegal 2-2.

In the match between Japan and eighth-ranked Poland, held in Volgograd, the Polish side scored the match's only goal in the 14th minute of the second half after a scoreless first half.

In the knockout phase, Japan is set to meet Belgium, which won Group G with nine points, on Monday.

Japanese Prime Minister Shinzo Abe rejoiced over the Samurai Blue's advance to the round of 16. "Congratulations! Keep going, Nippon (Japan)," he said on Twitter. Jiji Press