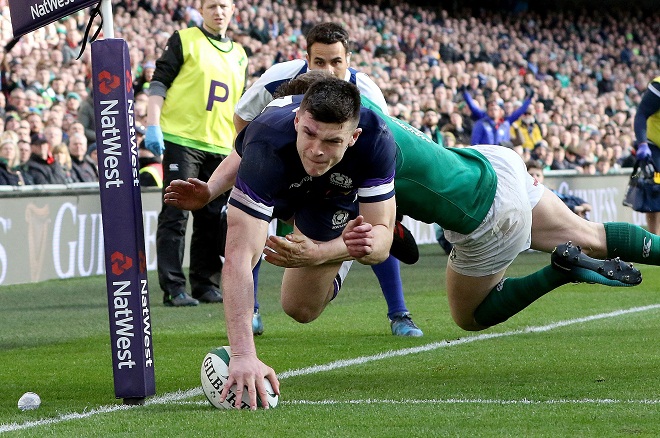 INTERVIEW: Iwate to capitalize on Rugby World Cup for reconstruction

Morioka, Iwate Pref.--Iwate Governor Takuya Tasso has expressed a resolve to capitalize on the 2019 Rugby World Cup for the reconstruction of the northeastern Japan prefecture from the March 2011 earthquake and tsunami.

Two games are slated to take place at a stadium in Iwate's Kamaishi, located in the Sanriku Pacific coastal area, which suffered huge damage from the 9.0-magnitude temblor and subsequent massive tsunami.

"I want many people to see what we've built over the last eight years and what is under construction," Tasso said in a recent interview with media organizations ahead of the eighth anniversary of the disaster on March 11.

"We want many people to rediscover Sanriku's natural beauty and great food, as well as history and culture, and hope that (the games) will serve as a boost to reconstruction," he said.

On the progress of reconstruction, Tasso said more than 96 pct of the urban development projects, including those for land readjustments and relocations to higher ground, will be completed within fiscal 2019 through March, Tasso said.

He added that major roads built after the disaster are opening one after another and that affected prefectural hospitals and schools have all reopened.

Meanwhile, Tasso said he is "sorry" that 2,827 people are still forced to live in temporary housing.

Construction of public housing for disaster victims is expected to finish within fiscal 2020, including in inland areas, Tasso said.

The Iwate prefectural government will work hard so that those living in the provisional housing can move to the next housing as soon as possible, he added.

At the end of fiscal 2020, the central government-designated reconstruction period will expire. Tasso called on the state to be flexible on the time frame.

"I want (the government) to secure financial resources for projects for tangible things that could continue after the 10-year period," Tasso said. He also pointed to a need for projects that become necessary after time lapses, including those for mental care.

Tasso talked about how to address concerns that reconstruction work may slow down in the future.

"For the fishing industry, we'll strengthen support to improve the return rate of salmon and secure sales channels, in order to tackle poor catches," Tasso said.

"We're also careful not to cause a plunge in public work orders from the prefectural government amid a decline in reconstruction demand," he continued.

He also pointed to a need to help businesses to better deal with the demands and challenges of the changing times, such as work style reforms and construction-sector productivity improvements.

Iwate still needs support staff, such as civil engineering and other specialists, though it is becoming difficult to secure such workers from other municipalities following a series of large-scale disasters in the country, he said.

"We hope to gain understanding by underscoring in a variety of media outlets that Iwate will never achieve reconstruction without support workers," Tasso said. Jiji Press