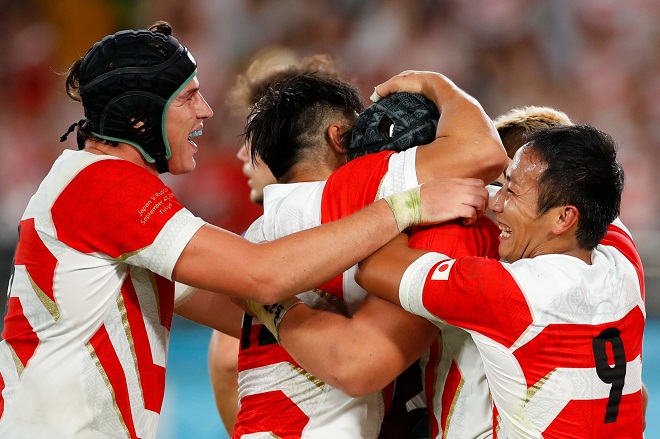 Tokyo- Cheers and excitement echoed through a packed stadium in a Tokyo suburb where Japan made a spectacular start in the 2019 Rugby World Cup, with a 30-10 victory over Russia, on Friday night.

Japan, hosting the quadrennial rugby competition for the first time and led by head coach Jamie Joseph, aims to reach the last eight in the tournament, which kicked off the same day. Japan has never secured a Rugby World Cup quarterfinal spot.

With the win over Russia in the Pool A match in the group stage, held at Tokyo Stadium in Chofu, Japan earned 5 points including one bonus point.

After ending the first half with a 12-7 lead, with Kotaro Matsushima from Suntory Sungoliath scoring two tries, Japan scored more to expand its lead in the second half. Japan had a total of four tries in the game--three by Matsushima and one by Pieter Labuschagne of Kubota Spears. Japan ranks 10th in the world, and Russia 20th.

The World Cup is participated by a total of 20 teams, which are divided into four pools in the first round of the tournament. The five teams in each pool will compete in a round-robin format. The top two teams in each pool will advance to the final knockout round, which starts on Oct. 19, with the final match scheduled for Nov. 2 at International Stadium Yokohama in the city of Yokohama, south of Tokyo. A total of 48 matches will be played at 12 venues across Japan.

In Pool A, Japan will take on Ireland at Shizuoka Stadium Ecopa in the central prefecture of Shizuoka on Sept. 28, Samoa at Toyota Stadium in Aichi Prefecture, also central Japan, on Oct. 5 and Scotland at International Stadium Yokohama.

In the previous 2015 World Cup in England, Japan finished with three wins and one loss in the group stage. The three wins included a historic victory, at 34-32, over South Africa, one of the strongest teams in the world.

"I hereby declare the opening of the 2019 Rugby World Cup, wishing exchanges through sports will deepen friendship among people across the world," Japan's Crown Prince Akishino, who serves as honorary patron for the tournament, said at the opening ceremony, held at Tokyo Stadium before the Japan-Russia match.

The opening ceremony featured performances of "wadaiko" Japanese drums and "renjishi," a kabuki play, as well as 3,776-meter Mount Fuji, the tallest mountain in Japan and a UNESCO World Heritage site, and other Japanese motifs.

Some 1,000 performers joined the 20-minute ceremony, with dreamy images employed.

At the beginning of the ceremony, dancers performed to evoke the 15 deities of sea, mountain and others.

Images of ripe golden ears of rice were projected for a successful World Cup, with images of the 12 cities hosting match venues on the ground.

Some 350 children holding the flags of the participating teams surrounded a Mount Fuji-shaped three-dimensional screen in the middle of the ground and introduced the teams.

During the ceremony, Richie McCaw, who served as captain of the New Zealand national team when it won the World Cup in 2011 and 2015, made a surprise appearance from the screen, holding the championship cup.

"This is a rare opportunity," said Azusa Yanagida, a 27-year-old corporate worker from Tokyo's Sumida Ward, who came to the stadium to see the opening match. "It was good that the ceremony featured Japanese themes."

Before the ceremony, the Japanese Air Self-Defense Force's Blue Impulse aerobatic demonstration team drew a cherry flower in smoke in the sky above the stadium.Jiji Press