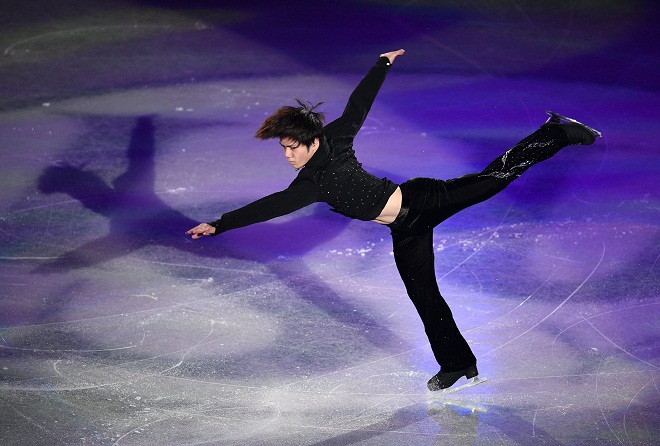 Keiji Tanaka, 23, who came second in the competition on Sunday, also secured a place to represent Japan in the games next February, along with 2014 Sochi Olympic gold medalist Yuzuru Hanyu, 23, who missed the nationals due to a right ankle injury.

In women's figure skating, Satoko Miyahara, 19, won the national competition for the fourth straight year on Saturday, qualifying for the Winer Games with Kaori Sakamoto, 17, who finished second.

"Now, I'm preoccupied with how to deliver my best performance" in Pyeongchang, Uno of Toyota Motor Corp. told reporters in Tokyo on Monday.

The Winter Olympics are "where I can challenge myself and see how far I can go," said Miyahara, a Kansai University student, who has recovered from a stress fracture of the left hip joint she suffered last season. "I want to enjoy my first Winter Olympics."

"I was picked while others also wanted to go," said Sakamoto of medical device developer Sysmex Corp., who won a ticket to Pyeongchang in her debut season as a senior competitor.

"I'm happy, and I want to deliver a performance with a sense of responsibility," Sakamoto said.

"I believe I've managed to improve gradually over the past four years," said Tanaka, a Kurashiki University of Science and the Arts student, who will make his Winter Olympics debut in Pyeongchang. He pledged to boost his efforts ahead of the upcoming world event. Jiji Press