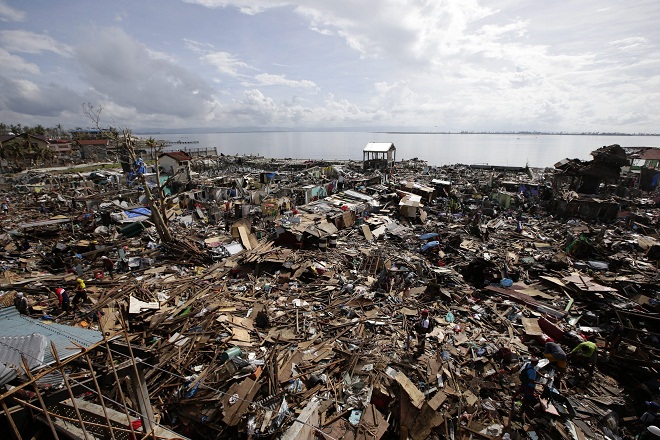 Six years after the Typhoon Yolanda hit the country, survivors alleged anomalies connected to rehabilitation and reconstruction of the hard-hit areas.

On the sixth anniversary of devastating Typhoon Yolanda (international name: Haiyan), survivors from Tacloban, Leyte and Samar said the administration has failed to fulfill its promise to prevent and punish officials over  inconsistencies in the reconstruction of Yolanda-hit areas.

"When President Rodrigo Duterte faced the Yolanda victims for the first time on 2016, he promised to penalize government officials who will be involved in any anomaly," the Community of Yolanda Survivors and Partners (CYSP) , a coalition of ten non-government organizations and 163 community organizations, claimed in a statement last Wednesday.

"President Duterte has failed to fulfill his promise. He also assured back then that if he were to be elected as the president, one foot of every Yolanda victims will be at the Malacanang," CYSP added.

The coalition said the housing project is one of the anomalies under the government's plan to reconstruct and aid Yolanda affected areas and people.

Out of the targetted 2015,186 housing units, only few have been constructed. Most, if not all,  used non-durable materials.

"There were a lot of anomalies in the Yolanda Reconstruction. In fact, there were investigations conducted... The Senate (led by Senator JV Ejercito) and the House of Representatives (led by Congressman Albee Benitez) had a hearing on the issue. Former Special Assistant to the President and Secretary of the Department of Budget and Management (DBM) Wendell Avisado also did some 'grassroots consultations," CYSP spokesperson Pascualito Ilagan said.

"The biggest anomaly done was in the housing project," he alleged.

CYSP said most survivors have yet to occupy some finished houses due to safety issues. Among these problems, which were also revealed in past investigations and consultations, were:

Unstrategically placed houses: according to CYSP, due to lack of consultations with the survivors, some houses were constructed in areas which were too far from the people's workplaces. "About 13-14 kilometers is the distance between the residence and about two more commutes before they arrive at where they currently work...as a result, their expenses doubled," it said.

There were also structures built in flood and landslide prone areas.

Substandard materials: the group also said in the statement that there were houses which were hastily-made and used substandard materials such as inaccurately-proportioned metals and poorly-mixed cement. Some also had shallow foundation.

The houses were made of "hollow walls and flooring, others had only Hardiflex ceiling boards and was filled by sacks," said the coalition.

Sub-contractors, according to CYSP, testified that faulty materials were used in the construction of some housing units. Some of the sub-contractors statement said:

"The depth of the foundation was supposedly 60 centimeters instead of 80 centimeters, however even though we have put only 40 to 60 centimeters, we already covered it because it was the instruction given to us," a sub-contractor stated.

"The second beam I used is 12 instead of 16 and it were only eight millimeters instead of the standard 19 millimeters - it was also prone to rust," another one added.

The dread of survivors brought by the dangerous condition of the poorly-made structures were heightened due to the recent quakes that rattled portions of Southern Mindanao.

"We were moved out of the danger zone just to be placed in the death zone," Lita Bagunas, a housing coalition leader in Eastern Visayas said.

However, the National Housing Authority (NHA) which was responsible for the project denied the anomalies and persisted there were only defects.

Due to quality issues, survivors were hesitant to occupy the housing units. Less than half of the targeted houses were occupied by the victims.

“According to Inter-Agency Task Force Yolanda (IATF) in our dialogue last September 3, 2019, due to the issued caused by the housing project, almost 50,000 houses are yet to be occupied by the victims. The estimated worth of these unoccupied houses are around P15 B,” Fara Gamalo of Freedom from Debt Coalition Eastern Visayas said.

“The public’s money are wasted because the anomalies are not being addressed and no one is taking responsibility,” added Gamalo.

Survivors also decried being prohibited to re-establish their own homes because "businesses were prioritized more than the rehabilitation of the community."

“Until now, we are forbidden to repair the houses, even though it has already been 6 years since Yolanda hit us,” Raul Ramos, president of Federation of Sicogon Island Farmers and Fisherfolk Association (FESFIFFA) said.

The CYSP reported there were no structural audit conducted for any of the completed houses.

The group said the issues will remain unaddressed unless authorities take full responsibility.

"(The government is) deaf when it comes to victims’ woes, especially to the poor. The victims did their best for their complaints to be heard, have suggested what should be done, but no concrete changes were done during the whole Yolanda reconstruction," CYSP said. Cristina Eloisa Baclig/DMS