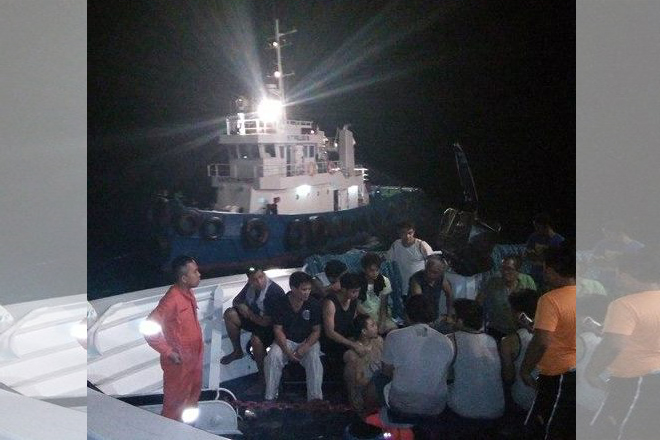 A crew member died while five were missing after a cargo ship sank off the waters of Corregidor Island early Tuesday.

Balilo said "investigation to the survivors including the master of the vessel revealed that on January 17  at 1 am, one of the crew suddenly noticed a fire coming from the purser’s cabin which is adjacent to the smoke stack of the vessel."

"All the crew tried to combat the fire but to no avail. It continuously spread on the main deck and reached the midship of the vessel where combustible cargoes were stored", he said.

Balilo said the master of the ship  declared “abandon ship" at 2 am.

Six crew boarded a life raft while five used a life boat which capsized after it was hit by strong winds and big waves around 3 am.

"They managed to cling to the boat, however, one of them identified as Sonny Ruado died due to severe exhaustion at 6 am," he said.

"At 7 am, the survivors decided to leave the body of Ruado with an empty plastic container tied around his body to serve as floater at vicinity waters 12 nm away from Corregidor Island," he added.

Balilo said the four survivors were Ronald Garcia, 54, the ship master, Chief Engineer Luis Madla, 60, Jun-Jun Manalo, 33, purser and Ian Badayos, 22, the cook were rescued by a passing fisherman at between La Monja and Fortune Island around 9:15 am.

"The survivors were immediately brought to shoreline of Brgy. Poblacion Mariveles, Bataan and were turned-over to Coast Guard Sub-station (CGSS) Mariveles," he said.

"CGSS Mariveles personnel immediately brought the rescued crew to the nearest government health clinic for the conduct of Medical examination," he added.

Balilo said the four were later turned-over to Philippine National Police in Mariveles after Gerald Sebastian, Municipal Health Officer, has certified that all of them were in good physical condition.

Another crew member identified as Angelo Gambol the quarter master was also rescued by a fisherman at Bogiw Island, near Brgy Papaya, Nasugbu Batangas around 2:30 pm of the same day.

Balilo said "according to Gambol, immediately after the skipper declared abandon ship, they were divided into two groups. Gambol together with five other crew proceeded to the forecastle deck (front part of the ship) and lowered the life raft."

He said Gambol was "accidentally left behind as he slipped out when it was his turn to board the raft."