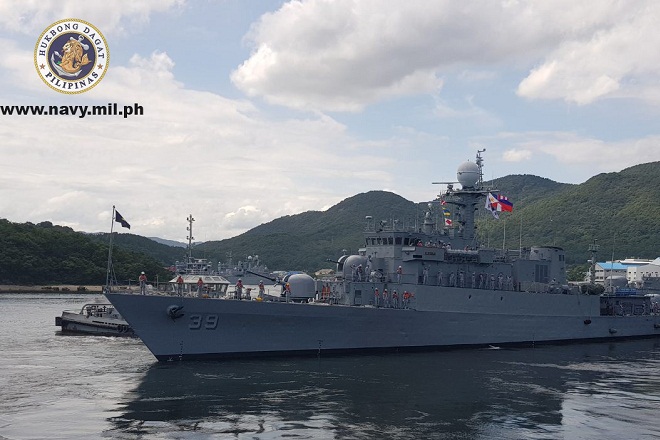 The first corvette of the Philippine Navy arrived from South Korea on Sunday, a military official said on Monday.


"Yes they arrived early morning of Sunday together with (BRP Davao del Sur) LD602," he said.


BRP Conrado Yap, an ex-Pohang class corvette from South Korea was formally transferred and commissioned into the Philippine Navy service in a ceremony held at Jinhae Naval Base in Changwon City, South Korea early this month.


Bacordo said welcome and arrival ceremonies for the two ships and its crew will be in Manila on Tuesday.


Bacordo said the Naval Task Force 80.5 which participated in the Navy Day of Russia and LD602 came from Russia. Then they proceeded to Korea to escort the PS39 going to Manila," he added.


Bacordo said PS39 is the most powerful ship within the inventory of the Philippine Navy.


"Right now, it is the most powerful. She is the most powerful surface combatant of the Navy because she has two 76 mm Oto Melara. She also has two 40 mm Otobreda guns, anti aircraft guns, and she has anti-surface, anti-submarine, and anti-air warfare capabilities",  he said.


"She has two gas turbines for speed," he added.


Bacordo said the anti-submarine warfare capability of the Philippine Navy is  enhanced with the transfer of PS39.


"It is important because last time we welcomed the two Agusta Westland 159s... and now we have Conrado Yap which has an anti-submarine warfare capability," he said.


"It means it will increase our anti-submarine warfare capability. That is the implication... and then of course, we have strengthened firepower for anti-surface warfare and for air-to-air warfare, strengthen capabilities," he added. Robina Asido/DMS