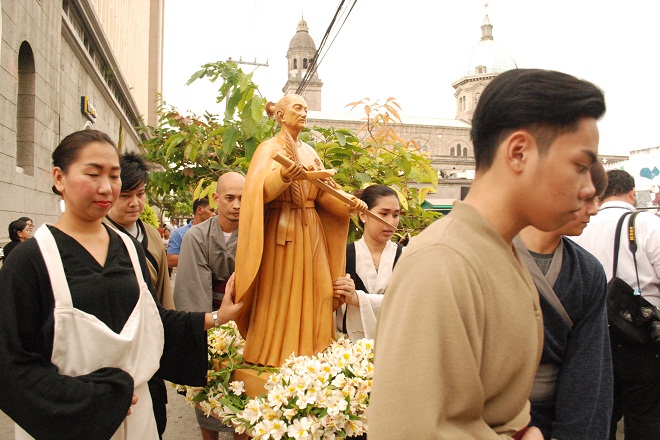 Starting 2019, the city government of Manila will celebrate December 21 as “Blessed Takayama Ukon Day” as the city celebrates the 404th anniversary of his arrival in Intramuros, Manila.

In a Resolution No. 273 released by Manila City government, it said that December 21 of every year will be “Blessed Takayama Ukon Day” in commemoration of his exile and arrival in Manila on 1641.

"With the policy of maintaining ties between Manila and Japan, the Manila City council express its unanimous and genuine support for the declaration of December 21 of every year, as a special day of commemoration of the Blessed Takayama Ukon,” the release said.

It said Ukon is an adopted “Son of Manila” who died a devout Catholic which led to beatification.

Friday's ceremony started around 4:30 pm where a group of Japanese carried a small statue of Ukon and entered the gates of Postigo del Palacio.

In an interview with Takehiro Kano, Minister and Deputy Chief of Mission of the Japan Embassy, he said he is very thankful for this initiative from the Philippines.

"This is a good chance for Japanese to learn the length of friendship and history between both countries,” he added.

Kano said the Japanese embassy supports the building of more good relationship between the Philippines and Japan.

Next year, the Department of Tourism will construct a trail that will inform Filipinos and tourists about Ukon’s journey.

Eight signages written in Filipino and Japanese will be placed in different location in Intramuros. It can be found in Postigo del Palacio, Pamantasan ng Lungsod ng Maynila chapel, Manila Cathedral, Palacio del Gobernador, Jesuit  Sta.Ana Church, where his ashes were believed to be buried; Garden of San Agustin Church and at San Agustin Church.

Intramuros administrator Guiller Asido said this tour will initiate a new journey between the two countries.

"This will be a new factor for tourism in the Philippines,” Asido said. “Many have said that he actually died here but he actually started his mission here as well and that should be continue until present time.”

Assistant Secretary for Tourism and Development Planning Roberto Alabado said through this new tourism feature, the country will be welcoming pilgrims from Japan, Hong Kong , Singapore and Korea.

Ukon was a wealthy daimyo in Japan who was exiled in the Philippines after choosing his faith over his loyalty to his shogun, Hideyoshi. He died in Manila under the care of the Jesuits on February 3, 1656. Ella Dionisio/DMS