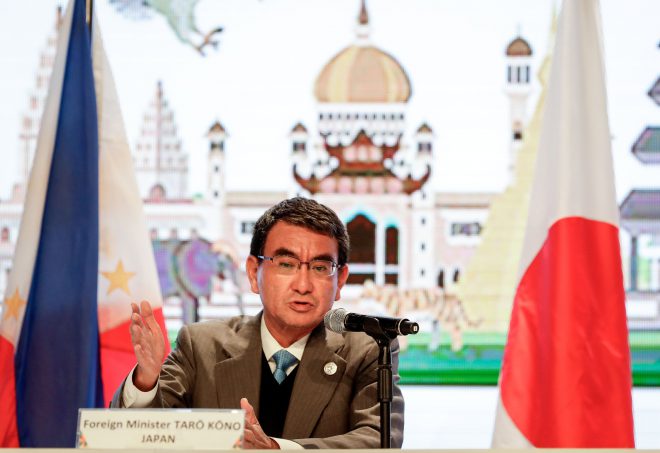 Japan"heartily welcomes" the enactment of the Organic Law for the Bangsamoro Autonomous Region in Muslim Mindanao regarding the Mindanao peace process in the Philippines after President Rodrigo Duterte signed it on Thursday.

This was the statement of Foreign Minister Taro Kono released by the Embassy of Japan in the Philippines on Friday.

"Japan strongly hopes that the transition process toward the inauguration of Bangsamoro will be steadily implemented, including ratification of the organic law and establishment of the Bangsamoro Transition Authority (BTA)," added Kono.

Japan has been supporting the peace process for many years under the conviction that peace in Mindanao will contribute to regional peace and stability.

As declared in the Japan-Philippines joint statement on bilateral cooperation, in October 2017, Japan will enhance its support for the development of Mindanao in a wide range of fields, in accordance with progress in the peace process.

Japan has been contributing to the advancement of the peace process and to the reconstruction and development of the Mindanao region through efforts that include: the dispatch of development experts to the Social and Economic Development Section of the International Monitoring Team; the concentrated implementation of economic cooperation projects such as extending Grassroots Grant Assistance for Human Security in former conflict-affected areas (Japan-Bangsamoro Initiatives for Reconstruction and Development (J-BIRD); and participation in the International Contact Group (ICG) that provides advice by attending peace talks as an observer. DMS