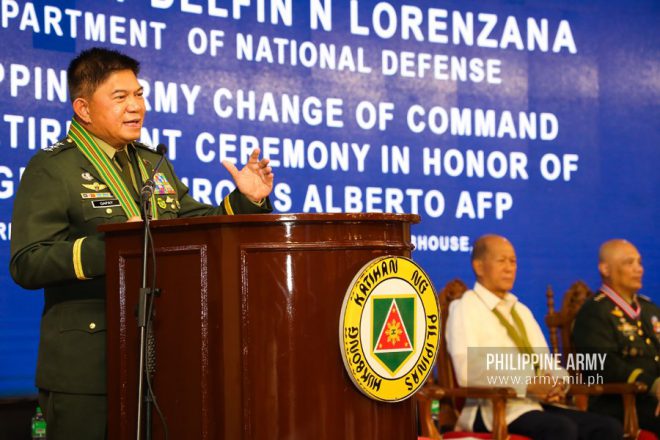 Gapay takes over as commanding general of Philippine Army

Lt. Gen. Gilbert Gapay formally assumed his post as the new commanding general of the Philippine Army during the change of command ceremony in Taguig City on Friday.

In his speech, Gapay vows to look after the morale of the Army troops.

“I have always adhered to two basic military guide posts of military commanders, the accomplishment of the mission and looking after the morale and welfare of my troops,” said Gapay as he also mentioned to “work towards the equipage” of the Army modernization program and enhancing its land power capabilities.

“I will sustain your gains and ensure that what you have set out to do shall come into fruition,” Gapay said while addressing Alberto.

“The Philippine Army shall remain a highly capable force provider to the Armed Forces of the Philippines," he said.

Zagala said Gapay, who graduated at the top of the Philippine Military Academy “Sinagtala” Class of 1986, has been serving the Army for 33 years.