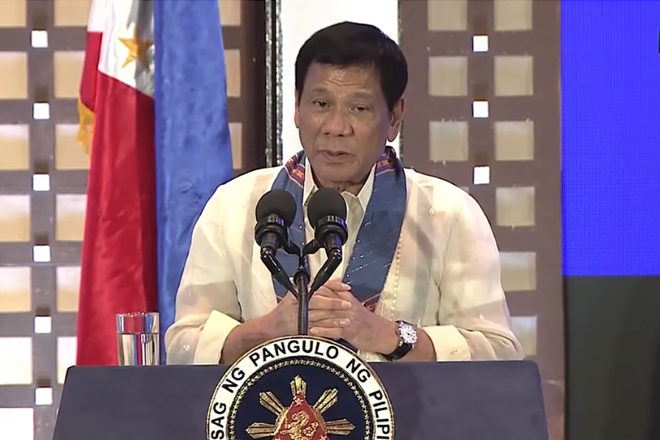 President Rodrigo Duterte on Saturday said the son of former Cotabato Mayor Muslimin Sema is one of the suspects in Davao City night market bombing last September and is now detained in Malaysia.

During the 49th annual installation of the board of trustees and officers of the Davao City Chamber of Commerce and Industry Inc.,  Duterte said authorities was able to capture the suspects, including Mohammad Abduljabbar Sema.

“They have all been accounted for. I captured them all. One of them is the son of Sema, (former) mayor of Cotabato. He is now detained in Malaysia,” he said.

Last September 2, 2016, at least 15 people died and 69 others were injured after an improvised explosive device was allegedly left by the Maute Brothers Group.

The elder Sema is a leader of the one of the factions of the Moro National Liberation Front. His mother is Deputy Speaker Bai Sandra Sema. She has not issued a statement.

Two lawmakers  strongly urged the Duterte administration to exert more effort in working for the  deportation of the son of deputy speaker Sema.

Muntinlupa City Rep. Ruffy Biazon and Akbayan party-list Rep. Tom Villarin made their position following reports that Sema was arrested at the Kuala Lumpur International Airport upon his arrival from Bangkok aboard Air Asia flight AK 891.

“It is imperative that the Philippine government exert efforts to bring the suspect into the country and face Philippine justice in order to show our resolve to pursue and prosecute agents of terror who have attacked Filipinos and our way of life,” said Biazon.

“His extradition must be demanded from the Malaysian government which has an obligation to do so as part of a regional effort to curb terrorism,” said Villarin.

Biazon warned that government’s failure to bring the young  Sema to the country will seriously affect the quest to bring justice for the victims.

“If we fail to take action in having the suspect brought into the country for investigation and prosecution, we would have also failed to give justice to the victims,” said Biazon. Ella Dionisio/DMS