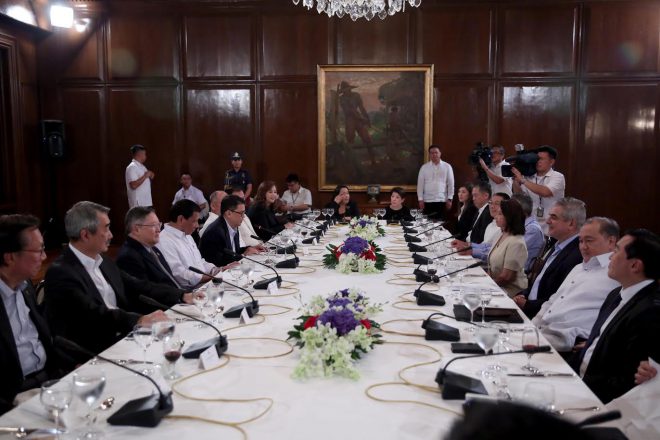 President Rodrigo Duterte hosted a three-hour dinner meeting with business tycoons in Malacanang where they settled "a number of uncertainties," his spokesman said on Wednesday.

Former President Gloria Macapagal-Arroyo was also present in the meeting.

"Their preconceptions regarding the President were settled because of their one-on-one face-to-face conversation. Many of them  had apparently never really met the President. But this is the first time they had --- they had this face-to-face and according to PA (Presidential Assistant on Entrepreneurship) Joey (Concepcion) a number of their uncertainties were settled," Abella said in a press briefing.

Concepcion initiated the dinner meeting of Duterte with the businessmen in order to enrol the latter and bring them on board to the government's agenda of inclusive growth.

On contractualization, he said the businessmen engaged Labor Secretary Silvestre Bello on the issue and they are "working out a win-win solution" for both the employees and employers.

Pangilinan said on Wednesday the meeting with Duterte "was an excellent occasion to see the president up close and personal.”  “I thought it was a very productive meeting," Pangilinan added.

"It was good for the private sector to communicate with the president what our concerns are, and what we can do to help government’s efforts particularly in terms of the poorest areas of the country," Pangilinan added.

Pangilinan said there was a lot of discussion in the Sulu area, and certain areas in Mindanao where the private sector could help.

Pangilinan said his company plans to build hospitals, roll out telecom services, housing for Gawad Kalinga and possibly a coconut oil mill.  " It’s  [Sulu] an island that has lots of coconuts," he added. Celerina Monte/DMS