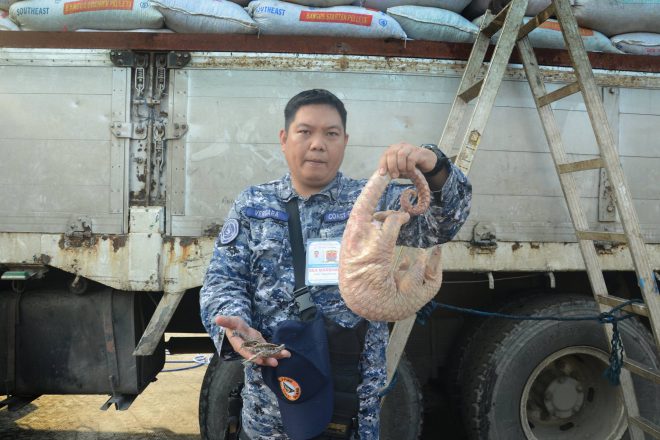 The Philippine Coast Guard seized seven styroboxes containing 60 pieces of pangolin, or anteater meat,  13 sacks of dried seahorse and one box of dried sea dragons in a maritime law enforcement operation conducted at the Manila North Harbor on Friday.

In a report, the PCG said the endangered species were confiscated from a 10-wheeler truck onboard a passenger and cargo vessel of 11,191.11 gross tonnage, owned and operated by 2GO Group Inc.

These items are considered endangered species by the Department of Environment and Natural Resources.

The Coast Guard received intelligence information from the Philippine Air Force about the ship that was  allegedly carrying undocumented endangered species which will dock in Manila from Bacolod.

“Upon her arrival at Pier 4 at 2:56 AM today (Friday), the board and search team immediately informed the skipper of the vessel of the presence of the reported smuggled dried sea horse and thereafter, requested the cooperation of the truck driver, Sueta Marjun and helper Benjio Estrella in the conduct of a search,” the report said.

“Initial inspection revealed that undetermined quantity of dried sea horse were loaded onboard the truck and were declared as “scrap plastics” in the cargo manifest by a certain John Lee,” it added.

“The confiscated endangered species and the truck driver and his helper are presently under the custody of Coast Guard Station Manila and will be brought to Manila Prosecutor’s Office as physical evidence and for filing of appropriate charges,” the report noted. Robina Asido/DMS